Book Review: If I Built A School

If Jack built a school, there would be hover desks and pop-up textbooks, skydiving wind tunnels and a trampoline basketball court in the gym, a robo-chef to serve lunch in the cafeteria, field trips to Mars, and a whole lot more. The inventive boy who described his ideal car and house in previous books is dreaming even bigger this time.

If I Built A School is Chris Van Dusen’s third If I Built… picture book. Brilliantly coloured spreads full of wonderful imaginings provide the perfect leaping off point to spark children’s own creativity. If I Built A School is more like If I Built a fun park. From glass tube travel ports and spaceships to holograms and water slides, Jack’s school design is wild and heaps of fun.

While the inclusions in Jack’s school are perhaps not exactly surprising, it is the leap of creativity and the passing of design over to the child that I really like. As Jack tours his teacher around the school, introducing her to his plans and reasoning behind them, even sometimes admitting that he doesn’t yet have all the details on how something might actually work, it is the creativity that is passed into his hands and his teacher’s looks of wonder that I most appreciate (especially her considered look at the existing brick school box at the close of the book).

There is so much that one could do with children after reading this book. Having children design their own school is just one simple activity. Working with DIY holograms is an easy tech-related activity, while in-depth discussion, for example, about Jack’s decision to have animals sequestered into small enclosures just inside the entrance of his school could spark much-needed conversation about the relationship between animals and humans.

END_OF_DOCUMENT_TOKEN_TO_BE_REPLACED

When Alex finds out he is Unwanted, he expects to die. That is the way of the people of Quill. Each year, all the thirteen-year-olds are labeled as Wanted, Necessary, or Unwanted. Wanteds get more schooling and train to join the Quillitary. Necessaries keep the farms running. Unwanteds are set for elimination.

It’s hard for Alex to leave behind his twin, Aaron, a Wanted, but he makes peace with his fate—until he discovers that instead of a “death farm,” what awaits him is a magical place called Artimé. There, Alex and his fellow Unwanteds are encouraged to cultivate their creative abilities and use them magically. Everything Alex has ever known changes before his eyes, and it’s a wondrous transformation.

But it’s a rare, unique occurrence for twins to be divided between Wanted and Unwanted, and as Alex and Aaron’s bond stretches across their separation, a threat arises for the survival of Artimé that will pit brother against brother in an ultimate magical battle.

I was forced to read this book. It has quickly become a favourite amongst my book club members and I was fearful that my membership (despite being the group leader) was going to be revoked if I, too, did not read it. I was also intrigued when those same readers said they would rather go to Artimè from the Unwanteds than Hogwarts from Harry Potter. I thought that a) it was obviously a fantastic book or b) they were all crazy. Now I have read it for myself and, while it is certainly a fun book that teems with creativity and fresh ideas, I would still (and will probably always) choose Hogwarts, should my letter ever finally arrive.

I cannot overstate the popularity this book has amassed in the last few months at our school. It has been quickly passed from hand to hand, spreading through word of mouth and recommendations. The middle-school boys have been the driving force behind the fandom, but girls from that age group, and older, have equally loved it. And I can understand why. The Unwanteds is the ideal book for readers – those who value creativity and imagination for whom simple articles of stationary or clay or drawings or anything can always be more than they first appear.

END_OF_DOCUMENT_TOKEN_TO_BE_REPLACED 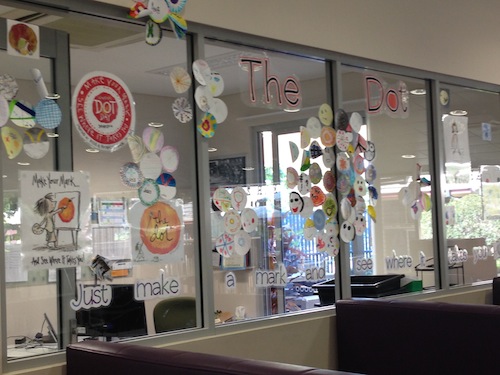 Have you read The Dot by Pete H. Reynolds? It is one of my favourite picture books. I love its message of creativity and having a go. 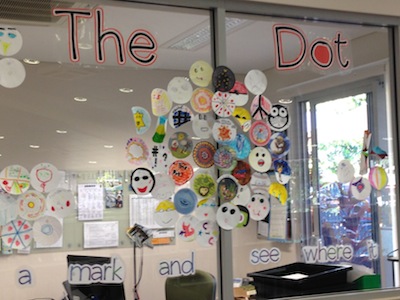 I printed off a load of blank dots – easily made with Word and the circle shape. Inspired by the story, the students created their own dot.  Emoji and Pokemon symbols were popular choices for the students, while others created beautiful patterns. I also printed off some celebri-dots from the celebri-dots website, to provide some inspiration.

I then made a giant dot out of all our little dots and added the quote “Just make a mark and see where it takes you” to the bottom of the display. It was a great way to incorporate student artwork into a display.