Ramblings: That time I created a viral video for my school library social media

I had a bit of a surprise last week. I created a viral video for our school’s social media account. I must add a caveat. While I created it, I did have some help and technically it’s not a viral video, as Google tells me I have to have over 5 millions views and our video certainly didn’t do that. But! We reached over 23,000 views and over 600 likes. For us and our little social media account that was massive. And honestly a little scary. Here’s how it happened. 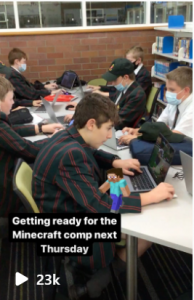 I relaunched our school library’s Instagram account this year. The Library Team had created it a few years ago, but it had been sitting dormant for a few years. When I joined the team this year, I wanted to start using it again. I had a great basis from which to work – just over 100 followers, most of whom were students. My goal was to increase engagement, promote the library and connect with both our school community and the wider school library community.

I’ve been posting regularly over the past three terms and when Instagram announced Reels, I happily gave them a try. I had been reluctant to join TikTok as I thought I wasn’t so great with videos – but maybe I need to rethink that.

Book Week 2021. We’ve got lots of competitions and events planned. The week prior, I am posting to our Instagram and trying to generate excitement about the following week’s events. I grab a 10 second video of the regulars playing Minecraft. I ask them for permission to share and then for some music suggestions. They chat a bit and argue over a good song and we finally select one. I add it, add a caption about next week’s comp, hit post and off we go. A week and a bit later, we have over 23k views and 651 likes. Our usual average for Reels views is 300-600 and the highest we’ve ever hit was just over 3000, so 23,000 was a massive leap. Same for likes.

This one Reel managed to reach more people, added lots of new followers to our account and generally created a buzz about our school library social media account. The boys were pretty impressed with their fame. I was curious. Was it the music? Was it the hashtags? Was it the algorithm magic? I’ve gone back to those boys for some more music suggestions and I’m going to try to recreate our success and see if it is possible. I’m also changing the way I interact with our social media account – focusing on engagement and student-driven posts and information.

I’ll continue to share my successes and failures here.

Is your school library on social media? Share in the comments below.