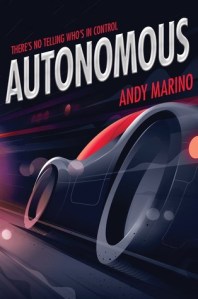 I was totally excited by the premise of Autonomous. It takes the humble road trip to the next level. How cool to win a car that can basically read your mind and take you where you really want to go – and in serious style, too. But things get serious pretty quickly. This wasn’t the sort of book I really enjoyed reading, too gritty for my tastes, yet it integrates such important, realistic themes and speculates on a future that seems all too possible. I totally understood Christina’s skepticism and wariness of Autonomous. I was rooting for her to hack the car and find its true, nefarious purpose hidden under its disguise of butt-conforming seats and luggage-hiding floors. Yet it is the four main characters who are the focus of this book, who go on the real journey of discovery.

The journey may not have been nice, and the secrets revealed take them to the very edge – drugs, violence, the dangers of internet communication, hacking, dangerous secrets. The chapters rotate between four perspectives, William and his three road trip companions. I did find the book quite long and perhaps the four perspectives added to this, but it does help the reader experience everything through each character’s eyes, allowing for the secrets to slowly unfold.

Autonomous is a interesting investigation into technology-meets-humanity, and how they each can reflect the true nature of the other.