Emika Chen barely made it out of the Warcross Championships alive. Now that she knows the truth behind Hideo’s new NeuroLink algorithm, she can no longer trust the one person she’s always looked up to, who she once thought was on her side.

Determined to put a stop to Hideo’s grim plans, Emika and the Phoenix Riders band together, only to find a new threat lurking on the neon-lit streets of Tokyo. Someone’s put a bounty on Emika’s head, and her sole chance for survival lies with Zero and the Blackcoats, his ruthless crew. But Emika soon learns that Zero isn’t all that he seems–and his protection comes at a price.

Caught in a web of betrayal, with the future of free will at risk, just how far will Emika go to take down the man she loves?

In Wildcard, Marie Lu once again plunges readers into the neon-coloured sci-fi world of Warcross, where computer gaming is taken to the next level and where the tech that enables a fully immersive experience is now a threat to the freedom of humanity.

END_OF_DOCUMENT_TOKEN_TO_BE_REPLACED 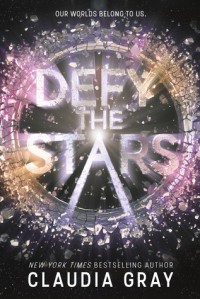 She’s a soldier. Noemi Vidal is seventeen years old and sworn to protect her planet, Genesis. She’s willing to risk anything—including her own life. To their enemies on Earth, she’s a rebel.

He’s a machine. Abandoned in space for years, utterly alone, Abel has advanced programming that’s begun to evolve. He wants only to protect his creator, and to be free. To the people of Genesis, he’s an abomination.

Noemi and Abel are enemies in an interstellar war, forced by chance to work together as they embark on a daring journey through the stars. Their efforts would end the fighting for good, but they’re not without sacrifice. The stakes are even higher than either of them first realized, and the more time they spend together, the more they’re forced to question everything they’d been taught was true.

Don’t you just love it when a book surprises you? I was surprised by how much I enjoyed Defy The Stars. It just seemed to get better and better. It was clever. It was original. It had so much packed into it. It made me want to desperately read the next book in the series and yet, at the same time, I was totally content with the story just as it was. It made me fall in love with science fiction all over again and reminded me just how good it can be.

Noemi is a solider from Genesis, sworn to sacrifice her life to protect her planet from Earth’s forces who want to destroy Genesis just like they have Earth. Abel is a machine. One of the most advanced robots ever created. But 30 years stuck on an abandoned spaceship has left his wiring a little crossed and he longs for freedom. When Noemi discovers Abel while on a rescue mission, she also discovers that Abel holds the key to protecting her planet from Earth forever. She commands his help and together they explore the galaxy, putting into place her plan. But Abel is growing ever more human, and Noemi is running out of time.

END_OF_DOCUMENT_TOKEN_TO_BE_REPLACED

Listening to@the podcast recording of @slavconnects Reading Forum part 3: Social Media. Some fantastic insight from authors, illustrators and library staff. Awesome presentation from Helen @fhclibrary
I love Book Week. Maybe as a teacher librarian that would be obvious but I also know it's a high-stress and very busy time. Book Week is all about celebrating reading, Australian literature and libraries. However, I have seen first hand when the stress and requirements of the big events can overwhelm the joy.
Can You See Me? A Book About Feeling Small
Enjoyed the day at the school athletics carnival. A lovely sunny day to be out of the library and part of the whole school spirit. I found that being part of these events is a great way to get to know the staff and students better. My new-this-year school is starting to feel like home. Also found some time to do some fun posts for the school library’s social media account.
My Literary Signpost is one of my top visited posts and I often have people request a copy. I've now turned the post into a free download, so you too can access the PDF with my signs. From Platform 9 3/4 to Panem, I've created old favourites and some more modern literary destinations. Perfect for your school library, classroom or a particularly bookish bedroom.
As a school librarian, what to read after enjoying Harry Potter is a question I get a lot. Reluctant readers often say Harry Potter is one of the books they might have enjoyed - or at least they've seen the movies. And another option I frequently come across are parents or students wanting something a little different from Harry Potter, with the same mix of magic and friendship, but maybe with more diversity or a different magical setting. This is a list of some of my top favourite recommendations. I've listed some more obscure suggestions than the usual Percy Jackson and the like options (though, Percy Jackson is a pretty great option too). I also included a few Australian authors. With suggestions for younger readers, YA and adult readers, I hope this list is helpful to the reader who loves and will always love Harry Potter, the reader who has just discovered Harry Potter and maybe the reader who has yet to try it.