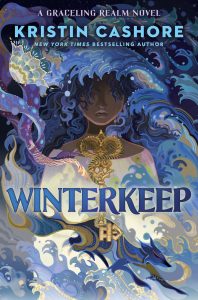 Four years after Bitterblue left off, a new land has been discovered to the east: Torla; and the closest nation to Monsea is Winterkeep. Winterkeep is a land of miracles, a democratic republic run by people who like each other, where people speak to telepathic sea creatures, adopt telepathic foxes as pets, and fly across the sky in ships attached to balloons.

But when Bitterblue’s envoys to Winterkeep drown under suspicious circumstances, she and Giddon and her half sister, Hava, set off to discover the truth–putting both Bitterblue’s life and Giddon’s heart to the test when Bitterbue is kidnapped. Giddon believes she has drowned, leaving him and Hava to solve the mystery of what’s wrong in Winterkeep.

Lovisa Cavenda is the teenage daughter of a powerful Scholar and Industrialist (the opposing governing parties) with a fire inside her that is always hungry, always just nearly about to make something happen. She is the key to everything, but only if she can figure out what’s going on before anyone else, and only if she’s willing to transcend the person she’s been all her life.

It has been a long time since I read Bitterblue and the rest of the Graceling series. And yet, despite the years, the characters and story have remained fresh in my mind. They are books I regularly recommend to other readers. Bitterblue is a book I so clearly remember finishing and I just needed to sit and soak it in. It is the book I measure all other 5 star reads against. So, when I heard that the Graceling series was getting another book I was thrilled!! I am pleased to say, Winterkeep is a fantastic addition to a wonderful fantasy series. It continues the story of Bitterblue and her rule over her country. But it also expands the series in ways I didn’t expect.

Bitterblue has spent the last five years renewing her country as Queen – trying to repair the damage done by her father. When she hears about lands to the East, countries with strange flying airships and foxes that communicate with humans telepathically, Bitterblue sends out envoys to learn more. But when the envoys do not return, Bitterblue and her trusted Council members journey east. But they find far more deception and danger than they were expecting.

Intrigue, politics, betrayal, original magical creatures, romance – this book is a mix of everything we fantasy readers love in epic fantasy.

It was so great to continue Bitterblue’s story. I loved seeing her come into her own as Queen, and finding her place. She is strong and clever. But she isn’t the only main, strong female character in this book. Lovisa Cavenda is daughter to two powerful politicians in Winterkeep. She is a student at the Keep, but living under her dominating mother’s shadow. While watching and listening, she learns something secret and deadly about her family and her future, along with those of many others, rests on how she will decide to act.

We readers get a few romances to go alongside Bitterblue’s and there are plenty of LGBT+ positive relationships.

Those who loved the Graceling series will no doubt thoroughly enjoy this addition to a fantastic fantasy series.