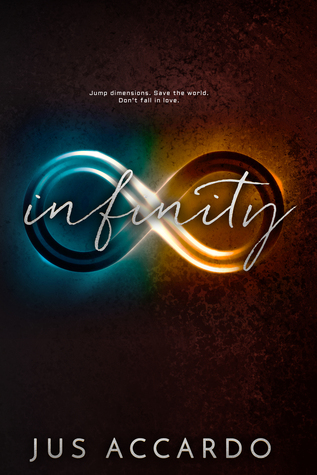 Turns out, Kori’s dad isn’t just an army general—he’s the head of a secret government project that has invented a way to travel between parallel dimensions. Dimensions where there are infinite Koris, infinite Cades…and apparently, on every other Earth, they’re madly in love.

Falling for a soldier is the last thing on Kori’s mind. Especially when she finds herself in a deadly crossfire, and someone from another Earth is hell-bent on revenge…

Infinity is the exciting start to a new series, with a complicated love story, sci-fi inter-world travel, a dangerous bad guy set on revenge across worlds, and an independent and feisty protagonist. It sets the scene for what promises to be a fun series.

Kori’s father, general in the US army, has left on duty once again. But not before laying down his punishment for her sneaking away from home in the middle of the night and contributing to her town’s artwork. Some might call it vandalism, she calls it bringing colour and beauty to dark places. But her new babysitters are unlike the stuffy soldiers her father usually sticks her with. Young, loud, messily dressed and hot, Private Cade and Recruit Noah are hiding secrets from Kori – secrets that could throw her life into chaos and change everything she has ever known about her world and family.