Book Review: We Were Kings 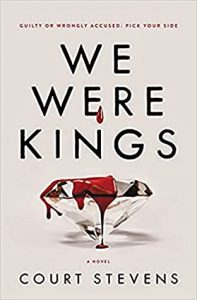 I do love a good murder mystery and We Were Kings is a jolly fantastic murder mystery. Despite the elements of modern life (masks, hand sanitiser and YouTube) it has a very classic feel. Maybe it’s just because the mystery is in the past, or maybe it’s the setting and overall feel. Classic mystery at its best.

Nyla has lived her whole life knowing her mother loves the woman sitting in jail more than she loves her. When Frankie’s death is pushed forward thanks to a new death penalty ruling, Nyla’s mother falls apart. When a journalist drops a clue that Nyla’s mother might not be who she has always said she is, Nyla decides to investigate and finds herself in the midst of a murder investigation. If she is going to save Frankie and find the real killer, she’ll need to be quick. But no one wants her poking around, especially not the real killer.

I kept guessing. Usually with mysteries, I suspect everyone and can then say I knew who was the bad guy or I have a pretty good idea early on, but We Were Kings kept me guessing, doubting and changing my mind. And the twist at the end was genius. Did not see that coming until just before it was revealed. Loved it. Actually, there were heaps of surprise twists and reveals that were lightly foreshadowed, but with so many other suspects and twists it was hard to predict what was coming.

I love that this book has two teens investigating a murder and it doesn’t feel contrived or strange that they, instead of the police, are doing the investigating. The set up is just perfect, and I also loved the addition of the video series. This is a years-old crime. The police did a terrible job or were paid off to do a terrible job. People have been fighting for years or trying to uncover information, but Nyla is uniquely placed and the time sensitivity means she can push and wrangle for details in a way no one has dared before. It does bring her into the spotlight and into harm’s way, as the killer as well as those politically placed to support the death penalty bill seek to silence her.

Nyla teams up with Sam early on in the book and theirs is a fantastic partnership. They are comfortable with each other, despite only just meeting and I love that they work together, support each other, banter, tease, hold hands and generally just investigate together. There were a few, oh my gosh are they going to kiss moments?!?, so the romantic tension was just hovering below the surface, but I think doing that would have pushed the timeline of the story and keeping it as more of a supportive friendship that could be more when they were not hunting down a killer made it so much more fun, realistic and kept the focus on the mystery. Again, genius.

There is so much to love about this book and love it I did. It’s one I’m going to enjoy sharing with my readers and an easy book to recommend.

Advisory: References to suicide, death, murder, human trafficking, violence, injury and prison violence. Murder, gunshot and suicide described. Vague references to assumed sexual assault with no details. References to drug use and addiction and use of methamphetamines. Regencies to adultery. References to the death penalty.