Book Review: If Not Us 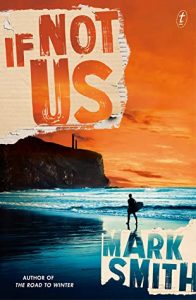 If Not Us is a standalone novel from the author of the Winter series. Mark Smith creates in If Not Us a story of growing up, falling in love and finding your voice to speak up and be heard. With themes of climate change action, grief, and first love, If Not Us is a relatable novel for teens with an authentic male narrator.

Hesse lives to surf. He works in a surf shop and spends his free time in the waves. His goal is to one day surf the reef called Razors, where his father disappeared at sea and died. When Hesse gets involved in his mother’s environmental group campaign to close a local coal mine and power station, Hesse is thrown into the spotlight. It means taking a stand and his voice becoming the key to the campaign. It also means standing against his friends, whose parents might lose their jobs if the mine is shut down. In the midst of it all, Hesse meets Fenna, an exchange student who is dealing with her own anxiety and decisions about whether to stay in Australia or return home. As the campaign heats up and Hesse’s feelings for Fenna deepen, Hesse has to decide what is most important to him.

The environmental argument is front and centre in this book, and I kind of enjoyed that it was so open, no covert or hidden messages – just a boy concerned about his world and taking a stand for what he believes in. There is no doubting his message or beliefs – that isn’t part of the story, but the impact on him, his friends and family members and the cost of speaking out is highlighted.

The other main part of this story is Hesse’s relationship with Fenna. Things progress very quickly, but in a stop and start manner. Fenna’s anxiety is normalised and Hesse and others in the book are totally supportive.

Pop culture, social media, bullying, videos going viral, young love and even a car chase and some suspense at the end, make If Not Us an easy and quick book to read and enjoy. I am sure my teen readers of all genders and interests will be able to relate to such a hot topic book.

Advisory: Sexual references, teenagers talk about the decision to have sex, conversation with mother about safe sex, references to a parent starting a new relationship and staying the night. References to death and grief, car crash and death. Violence. Coarse language f*** (2), sh** (39), di** (5), pi** (2).