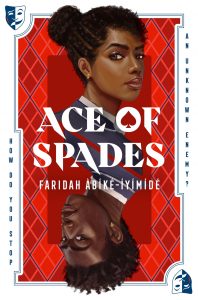 When two Niveus Private Academy students, Devon Richards and Chiamaka Adebayo, are selected to be part of the elite school’s senior class prefects, it looks like their year is off to an amazing start. After all, not only does it look great on college applications, but it officially puts each of them in the running for valedictorian, too.

Shortly after the announcement is made, though, someone who goes by Aces begins using anonymous text messages to reveal secrets about the two of them that turn their lives upside down and threaten every aspect of their carefully planned futures.

As Aces shows no sign of stopping, what seemed like a sick prank quickly turns into a dangerous game, with all the cards stacked against them. Can Devon and Chiamaka stop Aces before things become incredibly deadly?

Ace of Spades is heartbreakingly devastatingly yet as I was reading I knew that this is the reality for so many people and young people. It is thrilling, twisty and kept me guess right up until the last page. My main concern was how on earth the author could give me a satisfactory ending that was still realistic and boy, did Faridah deliver. Absolutely superb.

I was on the edge of my seat while reading this and often had my head in my hands and heart in my mouth. All the emotions and all the feels. Honestly, it wasn’t an easy book to read but oh my gosh it is such a powerful and reflective book of our current political and social landscapes.

Ace of Spades is a thriller, a mystery and realistic novel all in one. It’s #Diverse #OwnVoices #ReadWoke and every other on trend hashtag you could want. It’s gut punching and shows just how much resilience and strength it requires for people to survive in a society that seeks to destroy them. Ace of Spades is a debut novel and my gosh it is impressive.

Devon and Chiamaka are on opposites sites of the popularity hierarchy. Devon is shocked to find himself selected to be part of the school council. But it’s just the first shock, when Aces, starts to send anonymous text messages that contain secrets Devon and Chiamaka are desperate to keep hidden. Other students also become targets, but Aces continues to feature Devon and Chiamaka in the destructive texts. The two reluctantly team up to find out who is behind the texts and why they have been chosen as targets.

The book continued to throw surprise after surprise. But the best surprise was that ending. My gosh that just saved the whole book for me and took me from utter despair to a place of  righteous anger and a sincere level of respect – both for the characters and the author.

This needs to be on the shelf of every school library.