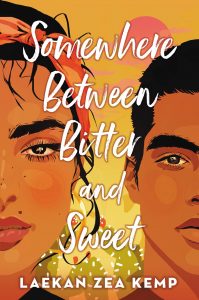 As an aspiring pastry chef, Penelope Prado has always dreamed of opening her own pastelería next to her father’s restaurant, Nacho’s Tacos. But her mom and dad have different plans — leaving Pen to choose between disappointing her traditional Mexican-American parents or following her own path. When she confesses a secret she’s been keeping, her world is sent into a tailspin. But then she meets a cute new hire at Nacho’s who sees through her hard exterior and asks the questions she’s been too afraid to ask herself.

Xander Amaro has been searching for home since he was a little boy. For him, a job at Nacho’s is an opportunity for just that — a chance at a normal life, to settle in at his abuelo’s, and to find the father who left him behind. But when both the restaurant and Xander’s immigrant status are threatened, he will do whatever it takes to protect his new found family and himself.

Together, Pen and Xander must navigate first love and discovering where they belong — both within their families and their fiercely loyal Chicanx community — in order to save the place they all call home.

I love books about/that feature food. They are also slightly torturous because food and that makes me hungry. And this book had me serious hungry for Mexican flavours and culinary delights. Of course, what sits so beautifully alongside this story of passion for food and the love that goes into their cooking is a heartbreaking story of belonging.

Penelope Prado knows where she belongs. She dreams of running her own bakery, and building it right next to her family’s restaurant. Her father disagrees, and when Pen finally tells her parents she has dropped out of school and walked away from the life they wanted for her, they refuse to speak to her and her father fires her from the restaurant. Pen is an incredibly strong character – and not just because the guys in the kitchen completely and utterly fear her (which is awesome, by the way). Pen has a history of depression, anxiety and self harm. With her future so uncertainly and her risking everything to chase what feels right, but not really sure how to actually move forward, Pen finds herself wrestling with her mental demons again.

Xander just wants to belong. He is undocumented and is constantly on edge and looking over his shoulder. He also wants to track down his father, who left his family and moved to the States, but doing so might break his Abuelo’s heart. Xander is currently living with his Abuelo and starts working at Pen’s family’s restaurant. Xander doesn’t see the hard exterior everyone else sees when they look at Pen. Instead, much to Pen’s disgust, Xander sees her at a weak moment and admires her strength all the more for it. For Xander, the restaurant is a place to belong – even if it is among the crazy, constantly pranking (and puking, there is a serious amount of drug and gross puking in this book, just warning you) co-workers.

The romance between Xander and Pen is what I am going to describe as slow burn. But my gosh, do they understand and support each other, which is so incredibly sweet. Together, and with their community, they must stand up against horrible racial discrimination and exploitation.

Somewhere Between Bitter and Sweet is a beautiful, funny, uplifting story of family and belonging, food and the love that is poured into every mouthful.

Reading Age Guide: Ages 14 and up