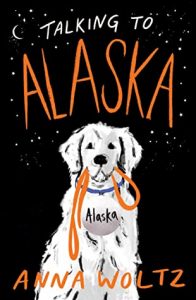 Sven has epilepsy. For him, this is a new diagnosis and new medication is making his health volatile. He desperately wants to make a ‘good’ impression on his classmates. He is sick of being the boy with a label and having to explain to absolutely everyone. He describes it like being a human in Mars and constantly having to explain who and what he is to the Martians. For him, Alaska is just a reminder of all the things that are ‘wrong’ with him, so he is reluctant to train her or enjoy her company. Rightly, this horrifies Parker when she learns that Sven has Alaska and isn’t loving her as she deserves.

Parker has had a tough year. Her parents were robbed at gun point. While her mother has returned to work, her father was injured and has yet to return to work. He spends hours watching the shop’s surveillance video. Parker witnessed the armed robbery and she is dealing with a lot of trauma from the incident. She also is tirelessly searching for the men responsible so they can be arrested. When she learns of Alaska’s new home she creates a plan to steal her back. Instead, under the cover of darkness, she and Sven start to talk – at first Sven not realising who Parker is – and they learn more about each other without the judgement.

A great novel for a class reading group with many points that would encourage discussion, Talking To Alaska feels reminiscent of the power of Wonder, with the added bonus of a beautiful and very clever Golden Retrieve.