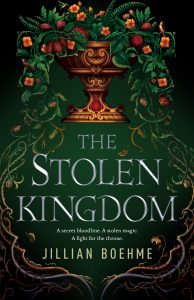 I thought the wine making aspect an interesting and original addition to the story. It gave both characters an instant connection -despite them not being able to talk about it much due to the secrets between them. It also gave the characters depth as they have this unique interest and are not just generic fantasy characters.

I do rather enjoy a haters to lovers romance, but Maralyth and Alac are not really enemies – or at least Alac doesn’t know Maralyth is planning to kill him and his family. And Maralyth, while not supportive of the current ruling regime, doesn’t hate Alac, in fact she rather likes him and has to constantly (and I do mean constantly) remind herself to not like him.

The Stolen Kingdom is a great standalone fantasy for readers to enjoy.