Book Review: To Whatever End 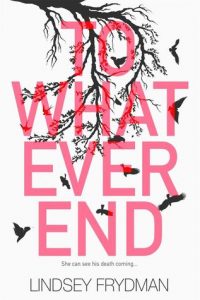 What if with every person you met, after just one touch, you have a vision of the last time you’ll see each other? Ever. Normally, these visions are innocent—two friends just drifting apart, a random stranger that brushed past you then never crossed your path again.

When I accidentally touch him, within only moments of our first meeting, I’m bombarded by visions of his death.

And from what I can see, I’m the reason he dies.

Now I just need to figure out why, and how to stop this from happening. Because not only am I to blame, but his very last words to me are…I love you.

Visions. Death. Visions of death. Romance. Count me in! At least, that’s what I thought I was getting. Instead, right from the first page you know there is going to be a whole lot of romantic tension, chemistry and flirting. This book ended up being completely about the romance and very little about the visions. This just didn’t grab me. It’s a book that I will sadly easily forget.

Quinn is cursed to experience the end of every relationship she has with anyone she touches. While this is the underlying thread, Quinn’s curse doesn’t feature all that much in the story. Instead, Quinn and Griffin’s romance takes centre stage. Quinn states that she isn’t interested in romance or guys, yet just seconds after meeting Griffin, Quinn is pretty ready to give love a go. Quinn is a few years older and has finished school, so that gives the book an older feel. He is living by himself, while Quinn lives with grandmother.

I would have liked to learn more about Quinn’s curse. Cursed seems a strong word for Quinn’s curse. It seems she only experiences the vision the first time she touches a person. Sometimes, with casual contacts, their relationship end is the same experience they have just had, never to meet again. With others, like the vision she has of Griffin, it’s a far more dramatic vision. The only explanation given for Quinn’s curse is that all the women in her family have experienced similar curses. Something I couldn’t understand is why do girls with special gifts or ‘curses’ only start experimenting with them or their ability to control that gift once a guy is involved? If I had special skills, especially one I didn’t like, I’d be playing, testing and learning from the day I first realised it. Not Quinn. Previously she has just shied away from people, except her one best friend, and she is only motivated to start investigating once Griffin’s life is threatened.

Quinn works to uncover that happened to make Griffin move away from his dad , but I felt like I didn’t get to know Quinn outside of her relationship with Griffin, which is all consuming. Their relationship is sweet, and oh the cheese. This is some cheesy, cheesy romance. Song lyrics, dancing and all.

Also, I had to minus points because the library is painted as this underused place and Quinn describes her job as a librarian as quiet and she has nothing to do. This is so different from the bustling libraries and librarians who are run off their feet running programs. I would hope that an author especially, when given the chance to feature a library should paint a positive picture of these services rather than contribute to negative stereotypes.

I know if I give this book to my book club readers, the first word out of their mouths would be cliched – harsh I know, but true of this book. But, if you like paranormal romances with a focus on the romance, you might like give this one a try.