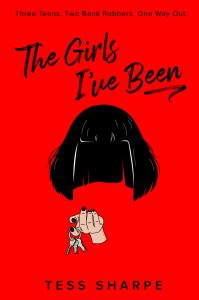 Our story starts with Nora, her ex-boyfriend and her new girlfriend stopping by the bank to make a deposit. It’s awkward, thanks to Nora’s ex discovering her new relationship mid kiss. When two armed men rob the bank, Nora starts to draw upon her specialised skill set to get the three of them to safety. But doing so means revealing her past to her girlfriend and the robbers, which might have dangerous consequences.

There is lots to love about this book. First of all, let’s talk about Nora. I love it when strong, talented young women take centre stage and all of Nora’s smooth-talking, devious planning skills are totally justified – as a reader we just don’t know why yet. But you will.

I loved that as the action in the bank unfolded, we also get to flick back and forth to Nora’s past. This is done by skipping back to each of the girls she has had to learn to be while her mother conned men. It was a dangerous and sometimes horrific childhood. I found myself torn between wanting the action of the present to continue and wanting to learn more about Nora’s past, and couldn’t put the book down.

The romance is awesome. Much of it has already happened – the beginning and the end of her romance with Wes – and her new romance with Iris. But despite the tension and high stakes, they still find time to spill some pretty big secrets and grow closer during the bank heist. Wes and Iris are both awesome characters, and they have their own backgrounds and depth of character to bring to the story, but my favourite side character has to be Nora’s sister who is fantastic and a little scary.