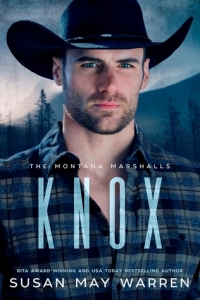 Montana rancher Knox Marshall’s danger years are behind him. A former bull-rider, he now runs the Marshall family ranch, raising champion bucking bulls for the National Professional Bullrider’s Expo (NBR-X). Wealth and success are his, but life is stable, expected, and…ordinary.  But he wants more from life…

Kelsey Jones just wants a safe life, a family, a home. Onstage, the beautiful rising star of the Yankee Belles becomes the person she longs to be – vivacious and confident – burying the brokenness she carries from a violent assault. Becoming NBR-X’s next country act is key to outrunning her past and achieving the success and security she craves.

Knox and Kelsey’s paths collide when an explosion at an NBR-X event traps them in the rubble and leaves them reeling. Kelsey’s crippling nightmares return, but for Knox, an obsession to find the bomber is ignited.

Don’t you just love it when one of your favourite authors launches a new series? Well I do, so I was very excited to start Knox, book one in the Montana Marshalls series. Readers of Warren’s other titles, might have already met the eldest Marshal family sibling, Reuben, in the Montana Rescue series. Knox is the second eldest Marshall, and this is his story.

Knox loves his family home and ranch, loves working the land and building up the security of the family business, even if it wasn’t his first choice. Branching out into breeding and loaning bucking bulls for the bull riding circuit seems to be paying off. When a bomb goes off at one of the bull riding events, Knox is drawn into the action and is concerned that Kelsey Jones, lead singer of the Yankee Belles, is the target. On stage, Kelsey finds her confidence and escapes the memories of a violent attack that stole her family and her security. She’s not sure why Knox offers her his concern and protection, but she’s glad he does, especially when he’s the first guy in a long time she feels safe around. But when the threat follows them to the Marshall ranch, Kelsey and Knox will have to decide what to risk for their future.

Susan May Warren consistently writes compelling stories and loveable characters. I love her big families (blood and circumstance) and love that she has started another series that will encompass another big family. Knox is that safe, dependable guy. It’s why he is the sibling still at home, taking care of his mother and the family business. It’s why Kelsey feels safe in his presence (even if ‘safe’ feels a little disappointing to Knox). There a plenty of action and tension, big scenes from the bull riding events to the bombs and close calls, but there are also lots of important, little moments about sharing dreams, finding the stars and falling in love.

Alongside Knox and Kelsey’s story, middle Marshall brother, Tate and Kelsey’s best friend and fellow Yankee Belle, Glo, start their story. The plot points weave together, so it makes sense for them to share this book and their story will be continued in the second book in the series, aptly entitled Tate.

If you enjoy romance and suspense, are a Susan May Warren fan or a new comer, or simply enjoy stories with lots of heart, Knox is the perfect book for you.