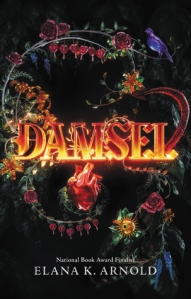 The rite has existed for as long as anyone can remember: when the prince-who-will-be-king comes of age, he must venture out into the gray lands, slay a fierce dragon, and rescue a damsel to be his bride. This is the way things have always been.

When Ama wakes in the arms of Prince Emory, however, she knows none of this. She has no memory of what came before she was captured by the dragon, or what horrors she has faced in its lair. She knows only this handsome prince, the story he tells of her rescue, and her destiny to sit on the throne beside him. Ama comes with Emory back to the kingdom of Harding, hailed as the new princess, welcomed to the court.

However, as soon as her first night falls, she begins to realize that not all is as it seems, that there is more to the legends of the dragons and the damsels than anyone knows–and that the greatest threats to her life may not be behind her, but here, in front of her.

From the cover and synopsis of Damsel I expected a sweet and adventurous novel about a girl who didn’t fit the damsel mould, who was brave and fought and showed the world how awesome strong girls can be. I expected a celebration of female strength. Instead, going into this book with nothing but the cover and synopsis as a guide, I found a deeply disturbing story about the worst of human behaviour. When Ama is rescued from a dragon by Prince Emory, she must accompany him back to his castle and prepare to become his wife. But Prince Emory is not a kind nor gentle man and Ama wants to discover the truth about the way he freed her from the dragon.

Damsel is certainly no pretty, little fairytale retelling. It’s far more like the dark, original fairytales of cruelty, pain and a place where women have no power. It quickly became clear the Emory is a horrible, vile character. As I was reading I slowly started to get this sick feeling. Stopping, I headed to GoodReads to see what other readers were saying, only to find that I wasn’t alone and that my fears for the book and its tone were not only going to be realised but become far, far worse.

While a mature reader may see the parallels drawn between the gender roles assigned in fairytales and society, may see it as a stark reminder of how bad it can be, it is hard to find a positive message to take from this story. And while readers are provided with a mildly satisfying ending, I was sad that it only benefitted Ama -deserving though she was – leaving the other women with no change, no great message of hope or seeing that while some men might be as vile as Emory, others are not.

There is no way I will be putting a copy of this book on our library shelves. It’s a book that certainly has a place within the wider publication market, but I simply cannot recommend it for teenage readers. Unlike I was, please be aware when deciding to read this book about the many triggers within the story, including crude references and strong derogatory language, physical and sexual abuse, rape, animal cruelty, self harm and suicide.