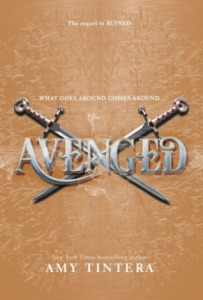 Emelina Flores has come home to Ruina. After rescuing her sister Olivia from imprisonment in rival kingdom Lera, Em and Olivia together vow to rebuild Ruina to its former glory.

But their fight has only begun. Olivia is determined to destroy everyone who acts against Ruina, but Em isn’t as sure. Ever since Em posed as Prince Casimir’s betrothed in Lera, she’s started to see another side to this war. And now that Cas has taken the throne, Em believes a truce is within reach. But Olivia suspects that Em’s romantic feelings for Cas are just coloring her judgement.

Em is determined to bring peace to her home. But when winning the war could mean betraying her family, Em faces an impossible choice between loyalty and love. Em must stay one step ahead of her enemies—and her blood—before she’s the next victim in this battle for sovereignty.

I forget how much I like to read fantasy books until I pick up a book like Avenged and I fall in love with the drama, romance, and beauty that is a cleverly created world and stunning characters. Life, freedom, and love are hard-fought in Avenged, and it will leave you desperate for book three in this exciting series.

Avenged was rather agonising to read. The characters face a lot of opposition – unjust opposition and that tends to drive me nuts. But it was so very addictive; a real pleasure to sink back into the detailed world Amy Tintera has created.

Avenged picks up where Ruined left off. Emelina Flores has been discovered as an imposter – not Cas’s true match but rather a Ruined. She helped her sister Olivia escape, resulting in the death of both Cas’s mother and father. Now Cas is king, but his cousin Jovita wants revenge on the Ruined. Cas just wants peace and to rebuild his kingdom, but with Jovita challenging his reign at every turn that seems unlikely to happen. Em has been reunited with the Ruined and is leading them with her sister. But while Em wants peace and safety for the Ruined, Olivia is set on revenge, killing for fun as much as freedom. As Cas and Em separately battle for peace they risk losing everything all over again. There are political alliances to make and wars to avoid and each step takes them further apart, even if destiny seems to continually bring them back together.

Avenger is the second book in this series. But it is no placeholder. It is just as full of intrigue and action and romance as book one, and now I am desperate for book three.

Em truly is a formidable character. Natural and gifted warrior and leader, she is compassionate, decisive, firm, and brutal, and she never gives up. I’ll admit that I’m much more like Cas – ready to drink my soup and forget the world exists (sorry, inside joke). But Em inspires him to be the best leader he can be – what he was born to be and so much more. It is his kindness and forgiveness, his determination to do the right thing that makes them so perfect together. I loved that while they were initially separated at the start of this book and many times throughout, they always seem to be reunited – something they themselves comment on. I will certainly be not be giving up on Cas and Em, even if their story isn’t finished yet.

There are also a few added romances to enjoy in this book and we get to know some new and old characters a little better – including the notorious and scary Olivia. There is endless
action, death and political wrestling, and everything is perfectly poised for something huge in the third book.

Avenged, like its predecessor, Ruined, is a fantastic fantasy novel, perfect for fans of Graceling, Snow Like Ashes, or Poison Study.