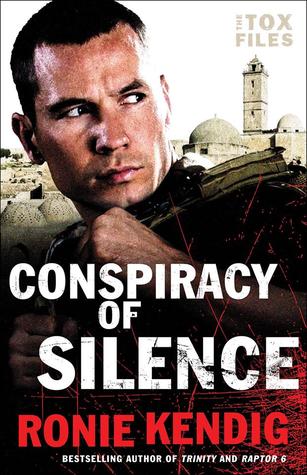 Four years after a tragic mission decimated his career and his team, Cole “Tox” Russell is persona non grata to the United States. And that’s fine—he just wants to be left alone. But when a dormant, centuries-old disease is unleashed at an archaeological dig where three Bronze-era censers are found, Tox is lured back into action. Partnered with an archaeologist and an FBI agent who’s an expert in deception, Tox and his team are pitted against a secret society, a plague dubbed the New Black Death, and a revered codex—which may hold the key to stopping the deadly outbreak.

Indiana Jones meets The Da Vinci Code meets military action movie of your choice is an apt description for this book. Military strategy, archeological digs, ancient artefacts, Biblical history, even a touch of romance; Ronie Kendig stretches the boundaries of what we have come to expect from her military suspense. In Conspiracy of Silence we have the same military heroes, weapons, and tactics, but a whole other level is added that takes almost a fantastical turn.

When Conspiracy of Silence begins, Tox has been dead for three years. He took the fall for their failed mission in exchange for wiping clear his men’s records. But a threat targeting his family brings Tox out of hiding and back into another mission that mixes terrorism with deadly plagues and ancient artefacts. He needs his old team with him but three years and silence brought with it a lot of pain and confusion. Together with FBI agents, mission leaders and archaeologists Tzivia Khalon and Dr. Joseph Cathey, Tox and his team will have just days to piece together the mystery of the deadly plague and stop the people responsible.

We met Tzivia in The Warrior’s Seal. She is an archaeologist and, as in The Warrior’s Seal, is at the heart of first discovering the artefact tied to the disease and the mission to prevent the plague from spreading. But Tzivia is not the love interest in Conspiracy of Silence like I thought she would be after reading The Warrior’s Seal. And I have to say I’m really glad about that, because a) Tox deserves someone more attuned to him and b) really, how many times can she dig up something deadly without wising up a little? You know, fool me once… But never mind because there is a much better character to enjoy.

The summary mentions an FBI agent who joins Tox and his men. That agent is Haven Kasey Cortes. A deception detector, Tox’s childhood friend (?friend? he dated her sister, she crushed on him from afar), and staunch believer in Tox’s innocence. She is the only one who calls him Cole rather than Tox, the only one who seems to think he is anything but toxic. When Tox discovers who Kasey really is it changes the way he approaches the mission – and maybe his life.

Conspiracy of Silence is just the start of the Tox Files series. And while there is a happy ending, there are plenty of loose threads that need to be tied up and, I’m sure, will be explored in subsequent books. It will be interesting to see how the series develops.

I enjoyed this book, mainly because of the strong characters and depth to their stories, while the mystery keeps things ticking along and the action makes it a fast-paced read.