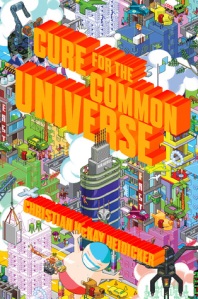 Jaxon isn’t your typical, loveable nerd. He’s lazy, rude, oblivious to the people around him and yet totally realistic. Surrounding Jaxon at v-hab are an assortment of characters from the bullying jocks to his own weirdly wonderful guild members – girls who are strong and stand up for themselves and what they believe in, a heroin addict, a group leader who is a master gamer himself and a young boy who hangs off Jaxon’s every word (or command). They are at once stereotypical and yet push outside of what we expect from YA characters.
The setting is awesome, video game rehab set up like one giant video game in the middle of the desert sounds. Kart racing, paintball, sandcastle building competitions, sign me up! I must admit that 90% of the gaming references went over my head, but I know gamers will love this book, and even those with little gaming experience, such as myself, can enjoy this creative and thought-provoking novel.

And while the ending leaves one hanging, wondering what happened and what could happen next, it reminds the reader that this story doesn’t end with a happy ever after, it doesn’t end easily or neatly. Change isn’t as easy as we would like, real life is never like in the games (or books), and black and white is never as two-sided as we like to pretend. There is the possibility of Jaxon making a great turn around…and then we find that maybe things aren’t that easy. There is the chance of a great, all-consuming love story…only to discover that fate-destined first meetings don’t always mean happy ever after. There is the faint smell of a heroic rescue…yet princesses don’t need rescuing and sometimes the hero isn’t all that heroic.