Book Review: All In Pieces

That’s how they classified Savannah Sutton after she stuck a pencil in her ex-boyfriend’s hand because he mocked her little brother, Evan, for being disabled. That’s why they sent her to Brooks Academy—an alternative high school that’s used as a temporary detention center.

The days at Brooks are miserable, but at home, life is far more bleak. Savvy’s struggling to take care of her brother since her mom left years ago, and her alcoholic dad can’t be bothered. Life with Evan is a constant challenge, but he’s also the most important person in the world to Savvy.

Then there’s Cameron, a new student at Brooks with issues of his own; a guy from a perfect family that Savvy thought only existed on TV. Cameron seems determined to break through every one of the walls Savvy’s built around herself, except if she lets herself trust him, it could make everything she’s worked so hard for fall apart in an instant.

And with her aunt seeking custody of her brother and her ex-boyfriend seeking revenge, Savvy’s fighting to hold all the pieces together. But she’s not sure how much tighter she can be pulled before she breaks completely.

I thought All In Pieces read like a cross between Simone Elkeles and Sarah Dessen. It had a tragic backstory and tough current circumstances but with a good dash of family, romance and hope. It was incredibly enjoyable to read, and ran the whole gamut of emotions from anger, outrage, swooniness (yes, I think that can be classified as an emotion), sadness and just a bit of joy.

Savannah stabbed her ex-boyfriend through the hand with a pencil. He totally deserved it. But it means Savannah has to attend a special detention school, which makes caring for her little brother that much harder. But she has great friends and a crush on her new classmate, the ridiculously handsome and very out of place Cameron. So it makes singlehandedly balancing her alcoholic father’s rants, her brother’s tantrums and her aunt’s distaste a little easier.

Savannah can take care of herself, as she so eloquently proved to her ex. But she has a lot to handle and it’s not easy for her to let people into her life. She doesn’t trust easily, and for good reason. That’s why she runs so hot and cold with Cameron. Sure, he seems nice and talks to her (and only her), and her best friend is all for encouraging Savvy to give him a chance, but letting him into her life will mean revealing all her secrets and vulnerabilities.

END_OF_DOCUMENT_TOKEN_TO_BE_REPLACED 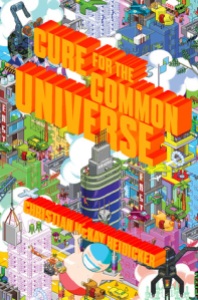 Jaxon isn’t your typical, loveable nerd. He’s lazy, rude, oblivious to the people around him and yet totally realistic. Surrounding Jaxon at v-hab are an assortment of characters from the bullying jocks to his own weirdly wonderful guild members – girls who are strong and stand up for themselves and what they believe in, a heroin addict, a group leader who is a master gamer himself and a young boy who hangs off Jaxon’s every word (or command). They are at once stereotypical and yet push outside of what we expect from YA characters.     END_OF_DOCUMENT_TOKEN_TO_BE_REPLACED