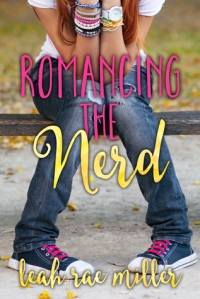 Dan Garrett has become exactly what he hates—popular. Until recently, he was just another live-action role-playing (LARP) geek on the lowest run of the social ladder. Cue a massive growth spurt and an uncanny skill at taking three-point shots in basketball and voila…Mr. Popular. It’s definitely weird. And the biggest drawback? Going from high school zero to basketball hero cost Dan the secret girl-of-his-dorky dreams.

A tuba-playing nerd with an eclectic fashion sense, Zelda Potts’s “Coolness” stat is about minus forty-two. Dan turning his back on her and the rest of nerd-dom was brutal enough, but when he humiliates her at school, Zelda decides it’s time for a little revenge—dork style. Nevermind that she used to have a crush on him. Nevermind that her plan could backfire big time. It’s time to roll the dice…and hope like freakin’ hell she doesn’t lose her heart in the process.

Romancing The Nerd is the quintessential nerd fiction, humorous and with enough in-jokes and references to make any nerd feel at home. With misunderstandings, hidden identities and plotting aplenty, this young adult romance will appeal to readers of fun love stories.

Dan was a nerd once a upon a time, but that was before a growth spurt and his dad landed him on the basketball team and propelled him to popularity glory (or torture, as he sees it). It meant leaving his nerdy friends behind, including Zelda, who has never forgiven him for it. An unfortunate incident (involving a basketball, a tuba and a whole lot of blood) puts Dan in Zelda’s crosshairs. Zelda is determined to enact her revenge. But Zelda never imagined that there was still a cute, fumbling, geeky guy under all that popularity. And it might just be harder for Zelda to hate him than she thought.
Romancing the Nerd is told in alternating perspectives, allowing the reader to get both Dan and Zelda’s side to the story. There are plenty of nerdy references, cosplay planning, LARPing (that’s Live Action Role Playing to the uninitiated), and of course comics and fanfiction. Dan’s big romantic gesture is pretty heart melting, and Zelda learns some important lessons along the way. I was impressed with the way characters stand up to bullying with their words and not their fists. Yay!

Maddie and Logan from The Summer I Became A Nerd are key characters and it was nice to catch up with them, though both books can be read as standalones.

Football, friendship, romance? What’s not to love.
The National Simultaneous Storytime book for 2022 has been announced - Family Tree by Josh Pyke and Ronojoy Ghosh.
Loved receiving this package from @schoollibrariansunited
Lynette Noni seems to take pleasure in her readers’ pain. That’s the only explanation for the cruel ending and the build up in this book that had me putting down the book and needing time away to just breathe and recover and psych myself up again for more torment. But it’s a good pain. Sometimes.
I so enjoy reading Denise Hunter’s books. I know once I pick one up, I’ll just disappear into the world and characters she has crafted and I know that I will love every word. And that’s exactly what I got in Riverbend Gap. This book is the first in a new series (yay) that follows a family (yay, yay) living in a small rural town along the Appalachian Trail (more yay). Honestly, between the amazing romance, stunning scenery so beautifully described, the drama and tension and the great writing, I just loved this book.
Putting the final touches on my genrefication webinar presentation for next week. I’m enjoying diving back into the research and latest trends around the topic. Also posting a thread on Twitter as I go.