Book Review: We Are Inevitable 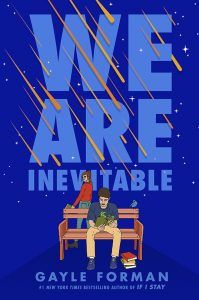 So far, the inevitable hasn’t worked out so well for Aaron Stein.

While his friends have gone to college and moved on with their lives, Aaron’s been left behind in the Cascade Mountains of Washington State, running a failing bookshop with his dad, Ira. What he needs is a lucky break, the good kind of inevitable.

And then he meets Hannah. Incredible Hannah – magical, musical, brave and clever. Could she be the answer? And could they – their relationship, their meeting – possibly be the inevitable Aaron’s been waiting for?

What does a failing bookshop, a group of lumberjacks and a grieving teen have to do with each other? If Aaron had his way, absolutely nothing, but in this funny, heartening novel together they have the power to change everything.

Aaron doesn’t know what his future holds and he is still reeling from his past. His mother has left, his brother is dead and his father seems to be ailing more and more each day. Aaron knows the bookshop that was once his parents’ whole world is struggling. If he had his way, he would sell it and finally be able to move on with his life. Just as Aaron is ready to sell a range of new people enter his life and seem determined to do everything they can to bring the bookshop back to life.

As a reader, it’s no surprise that I love bookshops and I know many other readers feel the same way. Bluebird Books plays a big role in this book. It’s the perfect setting for this story, falling apart, disorganised but has so much charm and love woven into its very fabric – exactly like the story of awe Are Inevitable itself.

The characters are so vibrant in this book, just as they are varied. First there is Aaron. Grieving, worried about his father and the bookshop, left behind by his classmates and floundering a bit. He is described by another character in the book as an unreliable narrator. Just as my heart hurt from him he frustrated me a little as he is so persistent in pushing others away from him and being so distrustful. We see the story from his point of view, but it’s still easy to see how his hurt rules his decisions.