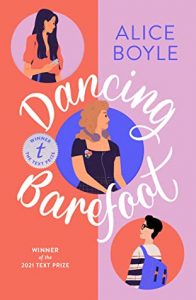 Dancing Barefoot is an utterly delightful YA novel about friendship, love, self discovery and fitting in. Authentic, richly detailed and genuinely just good fun, I loved every page of this novel and can’t wait to add it to my school library shelf.

END_OF_DOCUMENT_TOKEN_TO_BE_REPLACED

It’s bad enough that Nick’s sister is dead and, in some bizarre attempt to force him to confront his grief, his parents are shipping him off to Jesus Camp. But he’s also being haunted by the ghost of Jack Kerouac—who’s surprisingly annoying, for a genius.

And if arguing with a dead beat poet weren’t enough to qualify Nick for antipsychotics, he’s pretty sure Eden Springs Church Camp is going to drive him insane. The campers ride donkeys into the desert campsite; a retired magician dressed as Jesus seems obsessed with converting him; and Nick’s practically shunned for uttering the words “Harry Potter.”

Worst of all is the PC Box, into which every camper is required to place a nightly prayer or confession. In hopes of getting Jack to stop nagging him about it, Nick scribbles down his darkest secret—a secret about his sister’s death—and drops it in the box.

But then the box is stolen, with Nick’s secret inside of it. When campers’ confessions start appearing around the camp, Nick is desperate to get the box back—before the world learns the truth about what he did. The truth he can’t even face, himself.

What a crazy book! Jacked Up is a uncontrollable snort laugher inducing, hypocrisy identifying, gut punching, grammar fixing, donkey jokes kind of crazy book. With all the finesse and humour of its authentic male narrator, Jacked Up is an upfront and honest novel that delves into the aftermath of suicide, grief, and guilt, in a way that is easy to read and lots of fun.

I jumped into Jacked Up with little prior knowledge of its aspirations as a novel. And it totally surprised me. There were so many fun moments. Nick is an awesome narrator and totally realistic of a teenage boy. And the book doesn’t shy away from anything – coarse language, sexual references, innuendo, jokes of every description. Honestly, I’m not sure there is a teen boy (or maybe girl) alive who wouldn’t love to read this book. Unless you consider those who might be offended by it…. And let’s face it, there are many people who might be offended by the revealing of this teenage boy’s mind.