Book Review: Here’s To Us 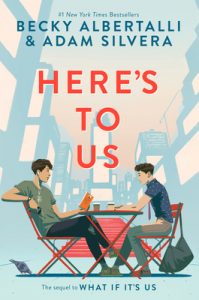 Here’s To Us is the long awaited (okay, it’s only been a couple of years, but it feels like forever) sequel to What If It’s Us. If you have read What If It’s Us, then you will know that if you wanted a happily ever after ending it desperately needed a sequel. And finally, finally, we have been gifted with a glorious, funny, delightful sequel. And that happily ever after? Oh yeah, there’s definitely a few of them this time around. A couple weddings, a few proposals, best friends forever – this book just seeps romance, love and heartwarming moments.

END_OF_DOCUMENT_TOKEN_TO_BE_REPLACED

Book Review: What If It’s Us

Arthur is only in New York for the summer, but if Broadway has taught him anything, it’s that the universe can deliver a showstopping romance when you least expect it.

Ben thinks the universe needs to mind its business. If the universe had his back, he wouldn’t be on his way to the post office carrying a box of his ex-boyfriend’s things.

But when Arthur and Ben meet-cute at the post office, what exactly does the universe have in store for them? Maybe nothing. After all, they get separated. Maybe everything. After all, they get reunited. But what if they can’t quite nail a first date . . . or a second first date . . . or a third? What if Arthur tries too hard to make it work . . . and Ben doesn’t try hard enough? What if life really isn’t like a Broadway play? But what if it is?

What If It’s Us is a cute boy-meets-boy, missed connections, do-over, sweet, funny, charming kind of book. Becky Albertalli and Adam Silvera are huge names in YA fiction right now and they pull off this collaborative work seamlessly.

Arthur is in New York for the summer. Ben lives in New York year round. Arthur is working as an intern at his mother’s law firm. Ben is hoping to pass summer school so he doesn’t have to repeat his Junior year. Arthur has never been on a date let alone had a boyfriend. Ben is reeling from his first breakup. When Arthur and Ben meet, they both feel something, but they leave without exchanging names or numbers. So begins a search across New York to find each other again. But when they do meet again, will they be able to start a relationship?