Nikki Kill does not see the world like everyone else. In her eyes, happiness is pink, sadness is a mixture of brown and green, and lies are gray. Thanks to a rare phenomenon called synesthesia, Nikki’s senses overlap, in a way that both comforts and overwhelms her.

Always an outsider, just one ‘D’ shy of flunking out, Nikki’s life is on the fast track to nowhere until the night a mysterious call lights her phone up bright orange—the color of emergencies. It’s the local hospital. They need Nikki to identify a Jane Doe who is barely hanging on to life after a horrible attack.

The victim is Peyton Hollis, a popular girl from Nikki’s school who Nikki hardly knows. One thing is clear: Someone wants Peyton dead. But why? And why was Nikki’s cell the only number in Peyton’s phone?

As she tries to decipher the strange kaleidoscope of clues, Nikki finds herself thrust into the dark, glittering world of the ultra-rich Hollis family, and drawn towards Peyton’s handsome, never-do-well older brother Dru. While Nikki’s colors seem to help her unravel the puzzle, what she can’t see is that she may be falling into a trap. The only truth she can be sure of is that death is a deep, pulsing crimson.

Shade Me is an intriguing mystery. The suspense starts from the very first page and only increases until you reach the dramatic ending. There are fights, clues, scary night scenes, a whole host of suspicious characters and a fierce, independent main character who can more than hold her own.

I really enjoyed this mystery novel. It read like a perfect crime show, but with more depth and twists. Nikki Kill is dragged into a criminal investigation when she receives a mysterious phone call, which is followed by a call from the hospital asking her to come and identify a girl who has been severely beaten. It seems that Nikki is the only one who can start untangling the complicated web of deceit surrounding Peyton Hollis. But the main question Nikki has is why she has been involved at all.  END_OF_DOCUMENT_TOKEN_TO_BE_REPLACED

Book Review: A Court of Thorns and Roses 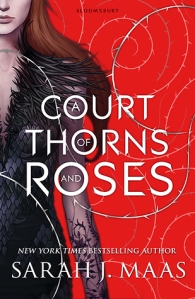 A Court of Thorns and Roses – Sarah J. Maas – Bloomsbury Children’s – Published 5 May 2015

Feyre’s survival rests upon her ability to hunt and kill – the forest where she lives is a cold, bleak place in the long winter months. So when she spots a deer in the forest being pursued by a wolf, she cannot resist fighting it for the flesh. But to do so, she must kill the predator and killing something so precious comes at a price.

Dragged to a magical kingdom for the murder of a faerie, Feyre discovers that her captor, his face obscured by a jewelled mask, is hiding far more than his piercing green eyes would suggest. Feyre’s presence at the court is closely guarded, and as she begins to learn why, her feelings for him turn from hostility to passion and the faerie lands become an even more dangerous place. Feyre must fight to break an ancient curse, or she will lose him forever.

I love beauty and the beast. Retellings of beauty and the beast are my absolute favourites, and this one ticked all the boxes. I was surprised by how enthralling this book was. It was incredibly rich in detail, sensual and also cruelly violent. The epic nature of this love story is matched by the clever plot and wonderfully strong characters. Totally addictive.

END_OF_DOCUMENT_TOKEN_TO_BE_REPLACED

Sometimes the only thing standing between fear and hope is you.

Almost a year ago, nineteen-year-old Cassie Harlen had a lot to deal with. A stack of college acceptance letters waiting for answers, a proposal from the boy next door, and a mother whose most recent bipolar episode left Cassie hurt and confused. Tired of cleaning up the messes caused by her mother’s disorder, of resenting her mother for not being there, and scared of being trapped by an inevitable future—which included marrying Graham Tucker—Cassie did the only thing she could think of to keep from ending up like her mother: she left.

Graham never knew why Cassie walked away. He woke up one morning and she was gone—along with the life that he’d created around her. After eleven months, Graham has a new plan for his future. One that doesn’t involve Cassie Harlen.

When Cassie’s mom nearly burns down her house, Cassie’s forced to return home. Back to a mother she’s tried to ignore and the guy she’s been unable to forget. Graham doesn’t know how he’s going to spend the whole summer living next door to the person who broke his heart without letting those old feelings push through to the surface.

Cassie walked away from everything – her mother, her home, her life and her fiancé. Or maybe she ran. Now at college she is trying to pretend to be someone else. But a phone call from her ex-fiancé about her mother setting fire to the house has Cassie returning to everything she once ran from.

END_OF_DOCUMENT_TOKEN_TO_BE_REPLACED

Everybody knows about the Cooper Killings – the Bel Air home invasion that rocked the nation.
There was only one survivor – a sixteen year-old girl.
And though the killers were caught they walked free.

Now eighteen, Nic Preston – the girl who survived – is trying hard to rebuild her life. She’s security conscious to the point of paranoia and her only friend is a French Mastiff bulldog, but she’s making progress. She’s started college in New York and has even begun dating.

But then one night her apartment is broken into and the life Nic’s worked so hard to create is shattered in an instant.

Finn Carter – hacker, rule breaker, player – is the last person Nic ever wants to see again. He’s the reason her mother’s killers walked free from court. But as the people hunting her close in, Nic has to accept that her best and possibly only chance of staying alive is by keeping close to Finn and learning to trust the person she’s sworn to hate.

To survive she has to stay close to him.
To keep her safe he has to keep his distance.

What an action-packed book. For some reason I put this book down just after starting it to read some others. Which is strange, because once I picked it up again it was un-put-downable. Fantastic action and suspense and great romance.