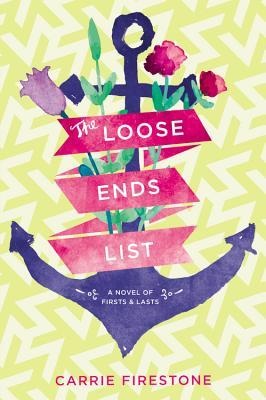 Seventeen-year-old Maddie O’Neill Levine lives a charmed life, and is primed to spend the perfect pre-college summer with her best friends and young-at-heart socialite grandmother (also Maddie’s closest confidante), tying up high school loose ends. Maddie’s plans change the instant Gram announces that she is terminally ill and has booked the family on a secret “death with dignity” cruise ship so that she can leave the world in her own unconventional way – and give the O’Neill clan an unforgettable summer of dreams-come-true in the process.

Soon, Maddie is on the trip of a lifetime with her over-the-top family. As they travel the globe, Maddie bonds with other passengers and falls for Enzo, who is processing his own grief. But despite the laughter, headiness of first love, and excitement of glamorous destinations, Maddie knows she is on the brink of losing Gram. She struggles to find the strength to say good-bye in a whirlwind summer shaped by love, loss, and the power of forgiveness.

The Loose Ends List is unlike any other book I’ve ever read. It is hilarious, frank, crude, beautiful, honest and so emotional. I know that from reading the summary you can gather that you will need tissues, but seriously. Pack tissues!

Maddie’s family is slightly crazy. They are passionate, fight lots, openly talk about sex and drugs, and swear like troopers. And Maddie’s grandmother is the craziest of the lot. She is Maddie’s favourite person, her confidant and idol. So the news that Grandma Astrid is dying and has booked the whole family on a death with dignity cruise hits them all, especially Maddie, really hard.

The writing in this book is fabulous. The story is crafted to draw you in, shock you and ultimately trap you within its web before you even know you are caught. This book not only discusses dying but euthanasia. This controversial topic is handled with humour and heart. Readers are presented with the argument for euthanasia through the view of the sick and dying, through those looking for dignity in their death, but we also see it through the view of the family who may not be ready to let go (though it’s interesting that no one raises any arguments against euthanasia). These themes and the level of coarse language and sexual content make this a book for mature readers (to the point that some readers may find the extensive sex jokes and references offensive), but it remains a very topical book.

Maddie at first comes across as a typically shallow, popular teenage girl. She is afraid of lots of things, from dying people to people who lick their fingers. She has IBS and likes to worry, so a death cruise isn’t exactly her idea of a good time. At first, she doesn’t cope well with the ill and dying people on the cruise. But as she gets to know these vibrant and colourful people they worm their way into her heart. She learns to see them in a new light, value them for their life stories and despite their mistakes. And for Maddie, the endings always come too soon.

This is a story of death and grief, of living and loving, family, and one girl’s grief. It’s a book that readers will want to devour, dissect, and discuss.