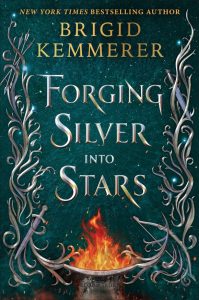 Forging Silver Into Stars is just the most beautiful fantasy novel, with romance, betrayal, intrigue and wildly swinging emotions. I don’t know how she does it but Brigid Kemmerer’s writing just gets better and better. I don’t know how to put my love for this novel into words, so instead I’ll just go about shoving this book into the hands of readers and demanding they read it.

Callyn and Jax are best friends and all the support the other has. Cal runs the bakery ever since her mother was killed in battle in Emberfell and her father was killed by the magesmith king in the uprising. Now her bakery is in debt and she has little hope for the future. Her only goal is to keep her little sister safe. Jax works hard as a blacksmith, but between his father’s drinking and gambling, there is no money to pay what is due in taxes. Ever since the accident that resulted in his foot being amputated, Jax has few options. When a noble arrives to leave a sealed letter with Jax’s father, he agrees to take it instead, for a price. Jax and Cal soon find themselves tangled in a secret network that could be treason and things get even more serious when the King’s Courier Lord Tycho arrives in town.

Okay, we have to start with the romance. At first, I was not at all sure how the romance would play out. Would we get a best friends to lovers romance between Cal and Jax, a love story between Cal and Tycho? Instead we get two romances, one that I didn’t see coming and is by no means settled by the end of the book and the other that stopped my heart in my chest with its pure, heartbreaking honesty and driving emotions. If you want to be surprised about the romance, skip the rest of this paragraph, but I can’t resist talking about Tycho and Jax and how wonderful they are together. The tension builds slowly between them, fuelled by Jax’s guilt and Tycho’s suspicions. They have both been hurt, emotionally and physically, and sharing that pain brings them closer. But don’t worry. Cal also gets her change at love, even if it is unexpected and the ending unsettled. More to enjoy for the next book.

While the third book of the Cursebreaker series caused me to doubt my love for Rhen, this one had me rethinking everything I thought I felt about Grey. His determination causes Tycho a lot of hurt and it is Rhen who steps up and offers understanding and a safe place.

While this book starts a new series, I really think readers will be best placed if they’ve already read all three Cursebreaker books, just to make sense of the world, the characters and the politics. While we start with two new characters, it isn’t long before the plot is being driven by Grey, Lia Mara and the rising tension in their lands. The book is written from three character perspectives, Cal, Jax and Tycho and it is amazing how the differing views bring such a different perspective to events. One minute I am hating characters and the next I’m not, one minute I question Cal’s actions, the next I’m complexly on her side. And of course, Tycho’s perspective brings us closer to Grey and Rhen and all our favourites from the Cursebreaker series, but it is so wonderful to see inside Tycho’s head and heart and get to know him even more deeply.

The plot had me hooked, but it was the characters, the romance and the heartbreak that kept me from putting this book down. I adored it, possibly (maybe definitely) even more than A Curse so Dark and Lonely (I know, I know, what am I saying?!? but we retain all the magic, all the familiarity of what I loved about that series and just turn up the heat.