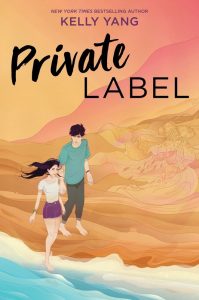 Faced with the utter upheaval of her world, Serene must support her mother during a terminal diagnosis and continue to steer and fight for the fashion design company her mother built. Serene faces racism, sexism and must fight against men who think they know better as they try to silence her and her mother. But Serene is smart and determined and won’t go down without a fight.

Serene knows her future is in the world of fashion, just like her mother who built a fashion company from nothing. But loans and investment partners are trying to force her mother out and when her mother is given a terminal diagnosis, it falls to Serene to fight for her mother, herself and their company.

Serene and Lian are the only Asian students in their school and in a mostly white area. Serene has survived by conforming and changing herself to fit in. For Lian, he’d just like kids to pronounce his name properly. His parents are no better, trying to force him into a career he has no interest in while ignoring his love for comedy and performing.

When Lian forms a Chinese Club at school, a diversion to get his parents off his a case and give him cover to explore stand up comedy, he doesn’t expect to get any members. Serene joins the club as she needs Lian’s help translating a note she has found from her father. She wants to reconnect with him and is horrified to learn that her mother has lied to her about their relationship and who her father is. Dealing with grief, the impending loss of her mother and men who want to control her every action, Serene finds a friend and support in Lian, as their relationship grows.

Private Label is a story of strength and determination, standing up and speaking out against discrimination. A story of love and friendship.