Book Review: In the Same Boat 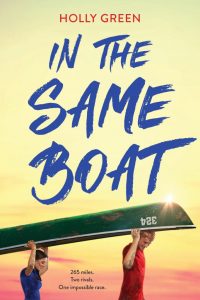 Sadie Scofield is just a few days away from the race of a lifetime. The Texas River Odyssey may be 260 miles and multiple days of arduous canoeing where every turn of the river reveals new dangers-downed trees, alligators, pitch black night-but those dangers pale in comparison to going another year knowing that her father is ashamed of her.

Last year, Sadie caused a disastrous wreck that ended her father’s twenty year streak of finishes, and he’s never looked at her the same. Now, she knows that finishing the race with her brother, Tanner, is her one shot to redeem herself. She’s ready for anything…except Tanner ditching her for another team at the last minute.

Sadie grits her teeth and accepts that she has to team up with Cully, her former best friend turned worst enemy. It’s irritating enough that he grew up to be so attractive, but once they’re on the river it turns out he’s ill-prepared for such a dangerous race. But as the miles pass, the pain of the race builds, they uncover the truth about their feuding families, and Sadie’s feelings for Cully begin to shift. Could this race change her life more than she ever could have imagined?

I do so enjoy a good, lighthearted realistic YA novel with best friends falling in love, but with an enemies to lovers twist, and some really heartbreaking family drama. In The Same Boat ticks all those boxes, along with being a really epic story of strength, survival and athleticism. Let me just say I am never, ever getting in a canoe and paddling for 265 miles. Ever. I can’t even understand why someone would want to. Nope. But, I can appreciate a good story about a character who has the determination to do just that. And that’s exactly what In The Same Boat captures.

For Sadie, all her family members have finished the Texas River Odyssey. But when she and her dad partnered for her first race it was a disaster, with her being injured and her dad not finishing the race for the first time in 20 years. After a year of tension between them, Sadie knows finishing the Odyssey is the only way to fix her relationship with her dad. But when her brother abandons her to join another crew right at the last second, Sadie must partner with her ex-best friend or pull out altogether. 3 days, 2 nights in the same canoe as the boy who hates her in the toughest race of their lives. What could possibly go wrong?

Sadie is tough. Not just physically, because duh, but mentally. Sometimes a bit too rough. But after living with her father and brother, who can blame her. She learns a lot in her time in the canoe with John Cullen. She also learns more about why their friendship fell apart and the truth behind the relationship between their families.

This is a great book about adventure and survival and despite the mud, log jams, mosquitoes and tension between the two characters, it’s a really enjoyable book.

I also want to say how much I love the cover. It perfectly captures the hard work and joy of this book. Also, Sadie is clearly carrying the heavy part of the canoe, which is exactly what happens in the story. Love it.