Book Review: The Hollow Inside 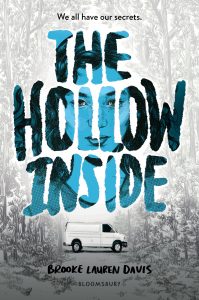 Phoenix and mom Nina have spent years on the road, using their charm and wits to swindle and steal to get by. Now they’ve made it to their ultimate destination, Mom’s hometown of Jasper Hollow. The plan: bring down Ellis Bowman, the man who ruined Nina’s life.

After Phoenix gets caught spying, she spins a convincing story that inadvertently gives her full access to the Bowman family. As she digs deeper into their secrets, she finds herself entrenched in the tale of a death and a disappearance that doesn’t entirely line up with what Mom has told her. Who, if anyone, is telling the whole truth?

The Hollow Inside is completely addictive but I also kind of wanted to read it between my fingers while covering my eyes as there is a near constant feeling of impending dread. Revenges, lies, betrayal, longing – a mystery thriller with so much heart.

I was so caught up in the world and so torn between waning to rescue Phoenix from the woman she calls mother and rescue Nina, both from herself and from the pain of her past. On one hand I was totally, one hundred percent behind the notion of revenge – make that man hurt, ladies. And on the other it’s so easy to see the hurt and destruction Phoenix has to endure while her mother seeks this revenge. There really isn’t a right answer, yet Phoenix has to chose every single day what her right will be. She longs for her mother to acknowledge her and the sacrifices she is making, yet her mother is constantly upset with her, angry and takes it out on Phoenix.

As Phoenix and Nina arrive in Jasper Hollow the truth of what happened there is slowly revealed. Some of this Phoenix discovers as she goes undercover as a sad, homeless girl and finds herself invited to live with the Bowmans. Other, clearer details are revealed through flashbacks to Nina’s childhood. This is what really caught me between wanting a different life for Phoenix and wanting revenge for Nina, as we see the hurt through Nina’s eyes. Does it justify Nina’s actions now or explain them? The reader will have to decide, as does Phoenix.

This is a mystery novel that while some of the character already knew what has happened there are other layers to the mystery yet to be revealed. It’s also a story about family and belonging. Phoenix isn’t lured by Ellis Bowman’s lies, but she is drawn to his family – son Neil who is a sweetheart, wife Jill who quickly folds Phoenix into her family and offers her a place working at the family restaurant and Melody, who while is frosty to begin with is hiding her own secrets and to whom Phoenix is drawn.

The romance was a bit of a surprise, but a really fabulous one. Not going to promise anyone a happy ending and the romance certainly isn’t the focus of the book, but Melody and Phoenix both find a sort of comfort, acceptance and belonging together that makes their connection potent.

The Hollow Inside is a beautiful mystery that is driven by relationships and interpersonal emotions, and explores the justification of revenge and the harmful impact of abuse.

Reading Age Guide: Ages 12 and up