Book Review: The Price of Valor 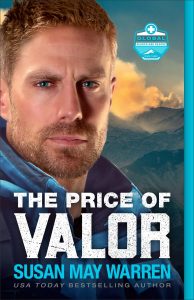 Former Navy SEAL Hamilton Jones thought that the love of his life was dead. But when a girl claiming to be his daughter shows up with a dire message from his wife, Ham knows he will stop at nothing to find her and bring her home.

Kidnapped by rebels while serving as an interpreter in Ukraine, Signe Kincaid has spent the past decade secreting out valuable information about Russian assets in the US to her CIA handler. Fearing for her daughter after being discovered as an operative, Signe sends her to Ham for safekeeping. She’s ready to give her life for her country, and she can hardly expect Ham to rescue her after breaking his heart over and over.

When Ham discovers the reason Signe has kept her distance, he must choose between love for his wife and love for the nation he has vowed to protect. Will he save the many? Or the few?

Another thrilling offering from suspense pro Susan May Warren. While writing this review of Price of Valor, I had to go back and check my reviews of Warren’s previous books to make sure I wasn’t using the same lavish praise phrases, but you could read any of my reviews of any of her books and apply it to Price of Valor, because her books are just that consistently good and I loved this book just as much as all her other books.

Price of Valor is the third book in the Global Search and Rescue series. I recommend reading the series in chronological order, as the characters arcs overlap the books and it is much easier to follow their backstories by reading the lead-in to their stories in the previous books. Each book is as exciting and engaging as the last, so it’s no hardship to read them all.

Price of Valor features Ham, leader of the search and rescue company, ex-military, and father – surprise. He never knew he and his wife had a daughter, nor that his wife actually survived the incident he thought she had died in. Instead, she and his daughter have been living in a terrorist’s training camp. Another surprise – his wife is CIA operative. Now, she has sent their daughter to live with Ham while she tries to bring down the head of the terrorist organisation. Ham wants to help but he can’t risk his new-found daughter’s safety, nor does he know if Signe is the same woman he married all those years ago or if life undercover has changed her.

Alongside Ham and Signe’s story, we get to continue the story of characters from book one and two, as well as quite a few appearances from characters from a range of Warren’s books, from Deep Haven to Marshall Family series.

The romance is delicious as Ham and Signe tentatively try to restore their relationship while still unsure if they can trust each other. There is also a lot of hurt and pain they have to work through, both infliction upon each other and from surviving horrific events. There is also a high incident rate of natural disasters – where this team goes, disaster follow, or maybe it’s the other way around. In any case, while also trying to outrun the bad guys, they also have to outrun earthquakes, volcano eruptions and tsunamis – and that’s just in the first few chapters.

I highly recommend this series for readers who enjoy suspense and romance, all with lots of action and an underpinning of Christian faith. Can’t wait to read the end book.