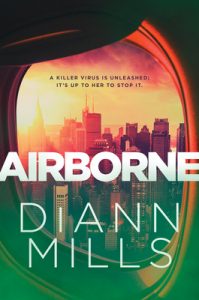 Heather Lawrence’s long-awaited vacation to Salzburg wasn’t supposed to go like this. Mere hours into the transatlantic flight, the Houston FBI agent is awakened when passengers begin exhibiting horrific symptoms of an unknown infection. As the virus quickly spreads and dozens of passengers fall ill, Heather fears she’s witnessing an epidemic similar to ones her estranged husband studies for a living–but this airborne contagion may have been deliberately released.

While Heather remains quarantined with other survivors, she works with her FBI colleagues to identify the person behind this attack. The prime suspect? Dr. Chad Lawrence, an expert in his field . . . and Heather’s husband. The Lawrences’ marriage has been on the rocks since Chad announced his career took precedence over his wife and future family and moved out.

As more victims fall prey days after the initial outbreak, time’s running out to hunt down the killer, one who may be closer to the victims than anyone ever expected.

I’m sure when DiAnn Mills was writing Airborne she had no idea that it would be released in the midst of a global pandemic, where a deadly virus was spreading throughout the world. It certainly made for some timely reading. Fortunately for the characters, they had a chance to stop the spread of their deadly virus and limit the contagion to just an airplane. Unfortunately, for the characters, their virus results in horrific symptoms and death. Airborne is a tense and thrilling read, with lots of suspects to doubt and a complicated investigation.

When FBI Agent Heather Lawrence takes her planed holiday to Salzberg, Germany, it’s not the romantic trip she imagined. Instead of being with her husband, they’ve separated and he has filed for divorce. When a terrible virus breaks out on the plane, their journey is halted as the authorities decide how to handle the situation. As the bodies start to pile up and the conditions onboard worsen, it begins to look like a deliberate act. Number one suspect is Dr Chad Lawrence, Heather’s husband and an expert in viruses, but does he have motive to want Heather dead?

It was interesting to read this book from the perspective of actually living in a global pandemic. Are things handled the same way? What’s the procedure? And it looks like DiAnn Mills got it spot on.

There are a lot of possible suspects in Airborne. A whole plane full, to be precise, plus a few extras. I guessed the culprit straight away, but that didn’t mean I had my doubts or considered the complexity of the plot. Are they working in a team, what’s their goal, what will they do next?

I didn’t like Chad. Not during his oh-whoa is me phase and not after his change in circumstances. He treats Heather terribly and I just wanted him to disappear altogether. But despite the circumstances, there is some romance in the book.

The investigation and response to the outbreak seems horribly slow as the agents and doctors all work around the clock to look at every angle and possibility.

If you don’t mind reading something that hits close to home in these new and strange times, you’ll enjoy the suspense and twists of Airborne – and you’ll maybe be glad you aren’t going anywhere by plane in the near future.