Book Review: The Girl The Sea Gave Back 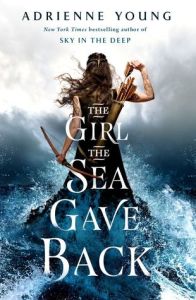 For as long as she can remember, Tova has lived among the Svell, the people who found her washed ashore as a child and use her for her gift as a Truthtongue. Her own home and clan are long-faded memories, but the sacred symbols and staves inked over every inch of her skin mark her as one who can cast the rune stones and see into the future. She has found a fragile place among those who fear her, but when two clans to the east bury their age-old blood feud and join together as one, her world is dangerously close to collapse.

For the first time in generations, the leaders of the Svell are divided. Should they maintain peace or go to war with the allied clans to protect their newfound power? And when their chieftain looks to Tova to cast the stones, she sets into motion a series of events that will not only change the landscape of the mainland forever but will give her something she believed she could never have again—a home.

The Girl The Sea Gave Back is a thrilling and sweeping fantasy, with magic, fates, wars, betrayal and destiny, all linked together through two young people who wield the power to change their people’s futures.

I did not realise this was the second book in a series when I started reading it. I had not previously read the first book, Sky In The Deep, which is set ten years prior to The Girl The Sea Gave Back. Fortunately, The Girl The Sea Gave Back is a complete story in its own right, and while there are apparently some character and setting crossovers, both books can be read as standalones.

Tova is an outcast. She lives with the Svell people, casting the stones and reading the fates for them but she is not accepted as one of them, living in isolation. She isn’t sure why her own people cast her out and knows her home with the Svell is tentative at best. When the Svell leadership is rocked by conflict and betrayal and Tova casts the stones that spell destruction for the Svell, she becomes entangled in the beginnings of a bloody war with the united clans to the East. But Tova is linked with a young leader from the Eastern clans and together, though working separately, they have the power to change the future.

I loved the setting of The Girl The Sea Gave Back. I love mythology and Nordic landscapes in fantasy books, so it was a pleasure to read and I know many of our library readers will be keen to get their hands on this book. While, despite the looming war and the race for information and safety, there isn’t a lot of action that drives the plot. Instead, intrigue and the switching perspectives of the two main characters is what kept me riveted to the story. The writing style is beautiful and matches the magnificence of the setting and bond between clans-people.

Tova’s past is a mystery, her future equally unknown. Halvard has been chosen as the next leader of his clan. He too is unsure about the future, especially with the threat the Svell pose. Tova and Halvard connect mainly through brief moments in perilous situations and Tova’s gift of casting the stones. Theirs is a fated connection and the romance that blossoms between them is one that holds so much promise for the future.

I am greatly looking forward to reading Sky In The Deep and any future books that are set in the same, richly crafted world.