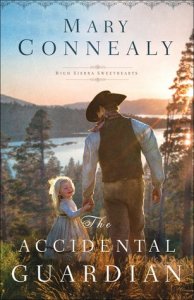 When Trace Riley finds the smoldering ruins of a small wagon train, he recognizes an attack by the same group who left him as sole survivor years ago. Living off the wilderness since then, he’s finally carved out a home and started a herd–while serving as a self-appointed guardian of the trail. He’d hoped the days of driving off dangerous men were over, but the latest attack shows otherwise.

Deborah Harkness saved her younger sister and two toddlers during the attack, and now finds herself at the mercy of her rescuer. Trace becomes an accidental guardian when he offers the only shelter for miles around and agrees to take them in until they can safely continue their journey. His simple bachelor existence never anticipated kids and women in the picture and their arrival is unsettling–yet enticing.

Trace and Deborah find themselves drawing ever closer as they work together to bring justice to the trail and help the group survive the winter–but every day closer to spring means a day closer to leaving the mountains forever.

I have previously steered away from Mary Connealy’s titles after starting a few titles and finding that her writing style wasn’t for me. I know that there are many, many readers who would disagree with my opinion. However, The Accidental Guardian sounded fantastic and I thought it was high time that I gave Mary Connealy’s writing another go. I’m glad I did. I really enjoy the first half of The Accidental Guardian. I enjoyed the setting and the story of lost souls facing much hardship and then finding a family together.

Deb and Gwen Harkness are traveling west in a wagon train. When their group is attacked at night, Deb, Gwen and the children they are minding are lucky to escape with their lives, while everyone else is murdered and the wagons destroyed. Alone in the middle of nowhere with winter settling in, Deb and Gwen are shocked when they are discovered and rescued by Trace Riley. Trace knows the devastation of being the sole survivor of just such an attack. He takes the Harkness women and the children in their care to his ranch, determined to track down the killers and bring them to justice.

Suspense, the fight for survival, and romance combine in The Accidental Guardian. The care Trace shows Deb and Gwen is very sweet, as he opens his home to them both. The loss the three of them have faced over the years gives them an understanding and a shared grief. Trace’s ranch hands, too, are very welcoming, quickly setting to work to ensure the women and the two children have a warm place to stay for the coming winter. And underlying it all is the tension of the murderers, still on the loose.

However, by the halfway point, I was disappointed by a few things in the story. The romance seemed to move from nothing to everything in an instant, quickly overtaking the storyline and very quickly altering Deb’s dreams for the future. Further, the mystery and suspense was concluded rather suddenly. I can only assume that perhaps that part of the storyline will be continued in the next book in the series.

Overall The Accidental Guardian was an enjoyable read, and I’ll be keeping my eye out for the second book in the series to see how the story develops.