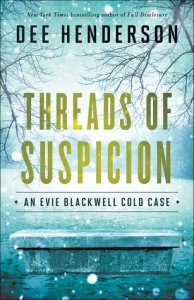 Evie Blackwell’s reputation as a top investigator for the Illinois State Police has landed her an appointment to the governor’s new Missing Persons Task Force. This elite investigative team is launched with plenty of public fanfare. The governor has made this initiative a high priority, so they will have to produce results–and quickly.

Evie and her new partner, David Marshal, are assigned to a pair of unrelated cases in suburban Chicago, and while both involve persons now missing for several years, the cases couldn’t be more different. While Evie opens old wounds in a close-knit neighborhood to find a missing college student, David searches for a private investigator working for a high-powered client.

With a deep conviction that -justice for all- truly matters, Evie and David are unrelenting in their search for the truth. But Evie must also find answers to the questions that lie just beneath the surface in her personal life.

Threads of Suspicion is an excellent suspense novel. Procedural, comprehensive and delightful, it was a pleasure to sink within its pages and join the investigators as they search for answers.

Evie Blackwell has officially joined the Missing Persons Task Force. Their first case load takes them to Briar County, Illinois, where Evie begins investigating the disappearance of a college student. Meanwhile, Evie’s new partner, David Marshall is investigating a missing PI. When their cases unexpectedly connect and then take a very personal turn, Evie and David will have their work cut out for them if they are to close both cases.

This is the second book in the Evie Blackwell Cold Case series. In the first book we met Evie Blackwell as she began a trial investigation for the newly created Missing Persons Task Force. Now that task force has official begun work and Evie, along with her new colleagues, are travelling to a new county within Illinois to investigate a series of cold cases. Despite this being the second book in the series, readers could easily begin their adventure with Evie with this book or read the books in any order, as they each feature a separate set of crimes and investigations. That said, it was lovely to rejoin Evie, reunite with a range of familiar faces from Dee Henderson’s previously published books, and meet some new characters. David, Evie’s new cold case partner is a particularly lovely new character, as is his girlfriend. I’m looking forward to getting to know them both a little better in future Evie Blackwell novels.

There is just something so consuming about Dee Henderson’s writing. I know that when I am about to start reading a new Dee Henderson book that I should clear my calendar and prepare to hunker down and hide within its pages. Dee Henderson’s books deserve to be savoured. Fortunately, thanks to holidays and a large weather event, clearing my calendar was exactly what I was able to do and I devoured this novel. I love the intricate way everything is pieced together. I love the steady pacing and focus on internal musing, and the hit of tension at the end as the case very quickly comes together. I love the twists in the case that I never saw coming. It feels like a real criminal investigation, where Evie and David follow the discovery of information and are hindered by the time in takes to pursue and crunch that information.

I also particularly love the characters. While sometimes the main characters feel incredibly perfect – flawed but flawed in a perfect way – they are nonetheless wonderful characters with whom to spend time. As mentioned before, there are plenty of familiar faces. Ann and Paul Falcon make a number of appearances, as do Bryce and Charlotte Bishop. Even a certain arson investigator named Cole gets a mention. Unfortunately, the character I most wanted to see, Gabriel Thane, did not make an appearance. While nothing romantic ever developed between Evie and Gabe in book one of this series, I was hoping it would in this second book. However, Evie is happily dating Rob Turney. While she is questioning her future with Rob, there was no mention of her reconnecting with Gabe. Sigh. It’s not that I don’t like Rob, he’s an all-round great guy, I just preferred Gabe. But then, there is always the next book… Here’s hoping.

I am eagerly awaiting the next book in this series, as Evie, David and the rest of the Missing Persons Task Force travel to a new county and begin a new set of cold case investigations. It is sure to be just as exciting and wonderful as this book.

Published:  2 May 2017 by Bethany House Publishers.