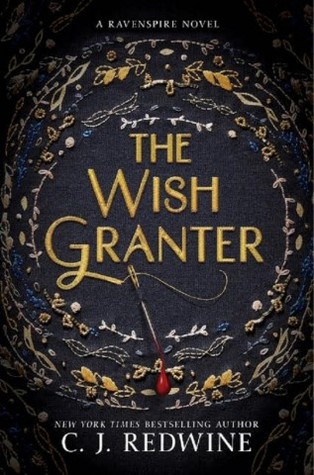 The world has turned upside down for Thad and Ari Glavan, the bastard twins of Súndraille’s king. Their mother was murdered. The royal family died mysteriously. And now Thad sits on the throne of a kingdom whose streets are suddenly overrun with violence that he can’t stop.

Growing up ignored by the nobility, Ari never wanted to be a proper princess. And when Thad suddenly starts training Ari to take his place, she realizes that her brother’s ascension to the throne wasn’t fate. It was the work of a Wish Granter named Alistair Teague, who tricked Thad into wishing away both the safety of his people and his soul in exchange for the crown.

So Ari recruits the help of Thad’s enigmatic new weapons master, Sebastian Vaughn, to teach her how to fight Teague. With secret ties to Teague’s criminal empire, Sebastian might just hold the key to discovering Alistair’s weaknesses, saving Ari’s brother—and herself.

But Teague is ruthless and more than ready to destroy anyone who dares stand in his way—and now he has his sights set on the princess. And if Ari can’t outwit him, she’ll lose Sebastian, her brother…and her soul.

C.J. Redwine has produced another exciting fairytale retelling that combines strength of character, love, family, resilience, and fighting for freedom despite the costs.

Ari is a newly crowned princess. Her brother has been crowned king after the mysterious death of their father and stepmother. But their thrones come with a serious cost. Ari discovers that her brother made a deal with the Wish Granter, a centuries-old fae who controls the underworld of crime in the kingdom and wants to go unpunished now that he has control over the new king. Ari is determined to break the contact binding her brother and recruits the new, young weapons master Sebastian to help her.

I dare anyone not to like Ari. She is humble, bakes, loves food (and eating), and is smart and kind. She was raised as an illegitimate child of the king, more part of the servants than the nobility. She plays to her strengths. She knows what people think of her and her habits but that doesn’t stop her from being true to herself (or stop her from enjoying regular snacks). Ari is a strong and likeable character, not because she is ruthless or physically strong (tripping over things is more her style), but because she is determined to protect those she cares about and uses her brain. Unlike her brother, I have to say. I wasn’t all that impressed with Thad. If making a deal with the Wish Granter in the first place wasn’t silly enough he remains weak throughout the book. Lucky for him he has Ari.

Sebastian is another strong and likeable character. He has been raised in poverty and abuse. He has scraped and fought his way out of his childhood and to remain clear of the Wish Granter’s hold. Ari worms her way into his life, promising to be his friend despite his reluctance to let anyone close, physically or emotionally. His support and belief in Ari in return is very heartwarming.

The Wish Granter is very much centred around the characters. The book is really about people and relationships. There was also a whole lot less fight training than I expected. That’s because to beat the Wish Granter Ari needs to use intellect and smarts rather than hand-to-hand combat. The partnership between Ari and Sebastian is more equal footed, in fact I think Ari helps him more emotionally than Sebastian helps her with her training.

The Wish Granter is written in third person, but chapters alternate between Sebastian and Ari’s point of view, and a few chapters from the Wish Granter’s perspective allows the reader an insight to the depth of his evil. And while there is a little bit of an explanation as to why he is like he is, he remains simply the evil guy who needs to be defeated – no hidden nice guy here.

The main principles of the original fairytale remain the same but the story is new, with the original fairytale forming part of the book’s backstory. This is the second book in this Ravenspire series of standalone fairytale retellings. The books can be read in any order. I enjoyed the first book in the series more than this one (maybe because it has dragons while this one just has a grumpy, old, nasty man). There was a quick glimpse of characters from The Shadow Queen and I’m interested to see if some new characters who made an appearance in The Wish Granter get their own book – a brother and sister team who escaped an evil witch and have become hunters of wild and dangerous beast for the fae courts.

I really like C.J. Redwine’s writing style and her realistic characters. With just enough death and desperation to make the story hit home, The Wish Granter is a new spin on an old tale.

Advisory: Violence. Drug use and references.