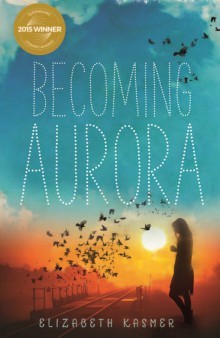 Tonight we are wolves. Our pack moves as one, past empty shop fronts and faded billboards.

But what happens when Rory’s path intersects with migrant boxer Essam’s and she becomes the victim, not the perpetrator? Can she find the courage to face her past and become the girl her dad called Aurora?

Becoming Aurora is a beautifully told story of a young girl’s journey from a place of hatred and misunderstanding to friendship, acceptance, and choosing to become who she would rather be.

Becoming Aurora touches on some timely topics, namely racism and prejudice. But it never feels preachy, because while those topics are addressed it is Aurora (Rory) who lies at the heart of this story. It is her story. It’s not a grand, fix-everything kind of story, it instead focuses on one girl. It may be about changing the world, but though one person at a time.

There is just something about Rory that grabbed me right from the start. She has so many things going on in her life – her father’s recent death and the guilt she feels over that, minding her younger brother, a mother who works many long hours to care for them, her friend Cam who seems to be changing so quickly, her friends who have grown increasingly antagonistic, and her having to face the fallout alone over their last attack. When we start this book Aurora has been sentenced to community service at the local nursing home. While her friends focus in on their next target she is stuck weeding gardens and washing dishes. And reading to the resident grouch. But she slowly gets to know the mysterious resident Jack and through him meets Essam, a local boxer.

I really enjoyed reading this book. I laughed, sighed, and genuinely enjoyed the characters, the setting, and the gentle journey of understanding and acceptance, not just of others but acceptance of one’s self as well. There is so much packed into this book and it is written in such an approachable and wonderful way. The romance was also perfectly balanced, timed, and positioned.

I also loved the setting. Practically my own backyard!! I love that this book is set in Queensland, Australia. I love the familiar Australian language and context.

I highly recommend this book. I can see both adults and young adults alike enjoying this story.