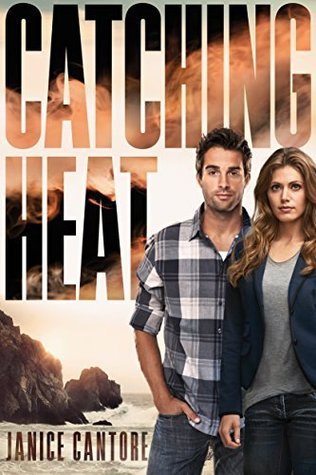 Twenty-seven years after the deaths of Detective Abby Hart’s parents, she’s desperate to find the proof that will put the mastermind–the governor’s wife–behind bars. When she joins a newly formed task force and teams up with PI Luke Murphy, Abby is sent to San Luis Obispo to work the cold case of a murdered college student. Realizing their investigation will bring them near the town where Alyssa Rollins grew up, Abby decides to do a little digging of her own into the Triple Seven fire. Luke is eager to help Abby close the books on a case they both have personal stakes in. But as she uncovers long-held secrets, Abby stumbles into an explosive situation, and Luke fears that her obsession may prove deadly.

Catching Heat is the conclusion to the Cold Case Justice series that readers have been waiting for. Will Abby finally have her answers and find justice for her parents? Well, you’ll just have to read it and find out.

Detective Abby Hart lost her parents in a fire when she was a child. In recent years she has drawn closer to discovering the truth about her parents’ death and the people that caused them. As Abby joins a new cold case investigation team, along with PI Luke Murphy and detective Robert ‘Woody’ Woods, she hopes to have the chance to close her own personal cold case for good.

It is interesting reading a mystery suspense when you already have a good idea of who the bad guy is. There are times this is explicitly stated, times when you think it is confirmed and yet little edges of doubt creep in – could it really be that simple or is there more involved? Also, you don’t know the whys or hows, nor is there any evidence, so it is a lot of fun joining Abby, Luke and their friends and colleagues as they try to find proof and close this case once and for all. As always with this series while the Triple Seven fire case is ongoing, there are plenty of other cases that Abby and Luke are working on, other mysteries to puzzle over as the whole thing crescendos to conclusion.

In the first and second book, either Abby or Luke had romantic entanglements elsewhere, so while their shared connection and fantastic chemistry drew them together, it was never romantically. But now, finally, they have the chance to get together. The first section of this book sees them struggling with the ‘should I, will she/he like me as much as I like them’ phase but it is awfully satisfying to see them take a chance on each other. But Abby’s focus on finally solving the Triple Seven murders might jeopardise her relationship with Luke. Just when you think things will work out, they get more complicated.

It was fun to see the resolution of this series and crime case. There were a few twists and plenty of suspense, shootings and general tension-filled mayhem. I thought it an excellent conclusion.

This series of books really should be read in series order as the crime investigation begins in book one and concludes in Catching Heat and there are many details to pick up along the way, as well as enjoying the development of Abby and Luke’s partnership.