Book Review: Everything We Keep 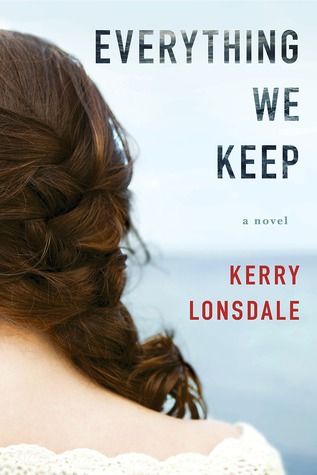 Sous chef Aimee Tierney has the perfect recipe for the perfect life: marry her childhood sweetheart, raise a family, and buy out her parents’ restaurant. But when her fiancé, James Donato, vanishes in a boating accident, her well-baked future is swept out to sea. Instead of walking down the aisle on their wedding day, Aimee is at James’s funeral—a funeral that leaves her more unsettled than at peace.

As Aimee struggles to reconstruct her life, she delves deeper into James’s disappearance. What she uncovers is an ocean of secrets that make her question everything about the life they built together. And just below the surface is a truth that may set Aimee free…or shatter her forever.

I have mixed emotions finishing this book. I loved some sections, disliked others, liked the main characters and then wanted to slap them for being so stupid. I had no trouble slipping into this book. I was captivated by Aimee’s story and then intrigued by the mystery. It was a true rollercoaster of emotions.

Aimee’s life is turned upside down when her fiancé is proclaimed dead after being missing for months. Gone are her dreams of marrying her childhood sweetheart, starting a family and maybe even opening a restaurant of her own. But moving on with her life is hard when she has doubts that James is truly dead.

The first two thirds of this book set up the mystery but then focused on the emotion of the story. We get to know Aimee and watch first her heartbreak and then as she slowly begins to recover from James’ death. She opens her cafe. She also wants to start a new relationship but holds herself back as the doubts about James’ disappearance refuse to stay silent. Scattered throughout are chapters from Aimee’s childhood and youth. In these flashbacks, we get to experience her and James’ friendship and their love story. It made the story and Aimee’s loss that much more real.

The last third of the book ramps up the mystery and drama. Secrets are revealed, some of which are pretty big and horrifying and, to be honest, hard to believe stayed hidden all this time. There were times I thought the whole thing would explode into car chases and shoot outs and other times I wasn’t sure how the whole thing would be neatly tied together. And then there is the ending. I liked the ending, but the epilogue throws in another, possibly game-changing twist, leaving me feeling a little heartbroken all over again. Perhaps there will be a second book, perhaps not. It could work either way and I’m not sure which I would prefer.

Again, mixed feelings about the romance in this book. Aimee seems to stumble her way through a lot of this book and I hated the way that she hurt both herself and the men she loved. I wished everyone would just sit down and discuss things before acting rashly and then saying even more rash, hurtful things!!! But it certainly added drama.

I can’t go into some of the things I disliked without giving away spoilers, but overall, I enjoyed reading this book. It was an interesting mix of contemporary and suspense.