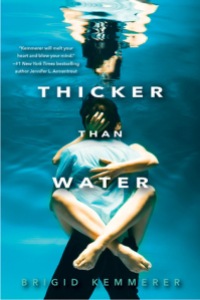 Thomas Bellweather hasn’t been in town long. Just long enough for his newlywed mother to be murdered, and for his new stepdad’s cop colleagues to decide Thomas is the primary suspect.

Not that there’s any evidence. But before Thomas got to Garretts Mill there had just been one other murder in twenty years.

The only person who believes him is Charlotte Rooker, little sister to three cops and, with her soft hands and sweet curves, straight-up dangerous to Thomas. Her best friend was the other murder vic. And she’d like a couple answers.

Answers that could get them both killed, and reveal a truth Thomas would die to keep hidden…

What a beginning. I mean, I knew it would be good, but I wasn’t expecting to be so instantly hooked to this addictive and thrilling story. With a mix of heady romance, suspense and mystery, plus just a touch of the paranormal, Thicker Than Water is a mature young adult novel that will have you second guessing every moment and swooning right along with the characters.

Brigid Kemmerer is very good at writing characters who are seen as outcasts or who are persecuted because of who they are (or what they have or haven’t done). I fell in love with Thomas straight off and was really, really hoping that he was innocent. It makes me so angry to see someone targeted like he is. I also felt for Charlotte. Her attraction to Thomas is instant, but she doubts both his innocence and her reaction to him. Charlotte has three older brothers who take being protective and overbearing very seriously, and Charlotte’s grandmother and mother are so old school they could be from the 1800s. Charlotte’s family are complex and both kind of annoying and loveable at the same time – actually they drove me nuts 90% of the time. Despite this, Charlotte is a strong character. She isn’t afraid to disobey her family’s constant orders, even if it is to hang out with a suspected murderer.

Thomas and Charlotte don’t spend a lot of time actively looking for other suspects or clues to solve who murdered Thomas’s mother and clear his name. Instead, the mystery sort of unravels around them as they struggle to understand what is happening. They fight the attraction between them, but it’s pretty potent stuff! The resolution to the mystery of who killed Thomas’s mother was interesting, and totally unexpected. It had me going back to see what I might have missed. I felt like the solution came out of nowhere, and I would have liked a little more time at the end to process this and see how it would affect the characters. Perhaps this means, though, that there will be a follow-up book. Here’s hoping.

This book could be both the first in a series or a standalone novel. The end does resolve the main mystery and I would be happy enough with that as the end of Charlotte and Thomas’ story, but there is also so much more that could happen. There are a few story threads left…loose, you could say. And the characters and setting are so rich that there are a million ways this story could continue.

This was an incredibly quick book to read, totally addictive and a whole lot agonising. I can’t wait to read what Brigid Kemmerer writes next, because it’s sure to be fantastic.