Display and Activities: Mystery In The Library

Mystery In the Library – Displays and Activities 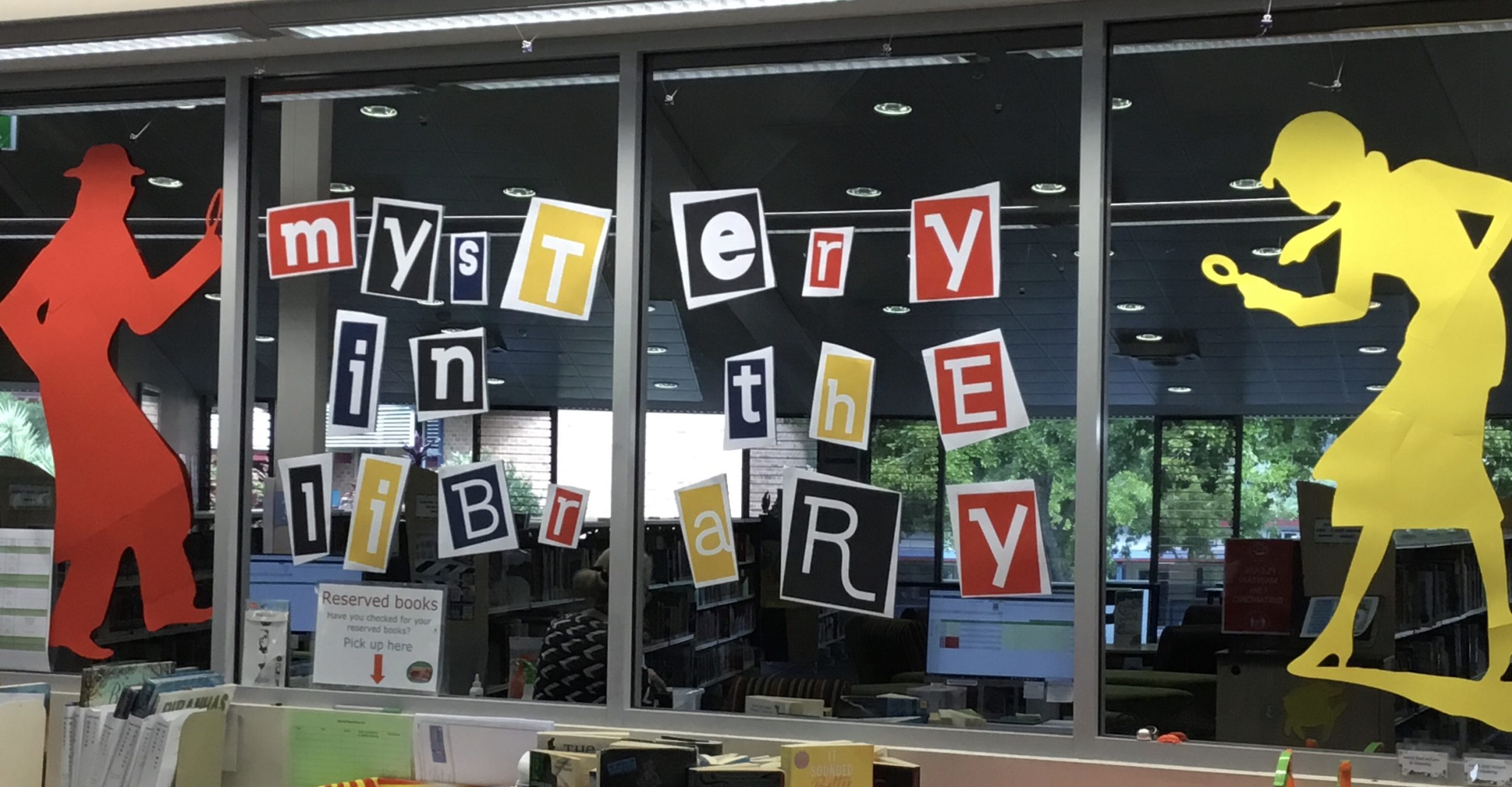 I used the Cricut machine to cut out some detective silhouettes. The font used to create the letters is Earwig Factory.

END_OF_DOCUMENT_TOKEN_TO_BE_REPLACED

Jessie Archer is a member of the Athena Protocol, an elite organization of female spies who enact vigilante justice around the world.

Athena operatives are never supposed to shoot to kill—so when Jessie can’t stop herself from pulling the trigger, she gets kicked out of the organization, right before a huge mission to take down a human trafficker in Belgrade.

Jessie needs to right her wrong and prove herself, so she starts her own investigation into the trafficking. But going rogue means she has no one to watch her back as she delves into the horrors she uncovers. Meanwhile, her former teammates have been ordered to bring her down. Jessie must face danger from all sides if she’s to complete her mission—and survive.

The Athena Protocol is a fantastic YA action thriller with a whole cast of strong and diverse women who are unafraid to take risks to bring the bad guys down. High action scenes, surveillance with cool tech, hand-to-hand combat and sniper shootouts all with a positive message about working together, family, belonging and righting the wrongs of the world. I seriously loved this book and can’t wait to see where the next book in the series leads.

Jessie is part of the Athena Protocol, a secret group of three highly-trained female operatives led by a group of powerful women. Jessie may only be young, but she has been trained by the best of the best in surveillance, combat, research, weapons, coding, and hacking. Which is why she and her team are surprised when, on their most recent mission, Jessie breaks orders and shoots their target. Suspended from the team, Jessie knows they will need her help as they go after a human trafficker with extensive resources. So, Jessie does her own research and fieldwork, but going rouge means she is without the support of her teammates and when things get really dangerous, she will have to watch her back.

END_OF_DOCUMENT_TOKEN_TO_BE_REPLACED

Jane has lived an ordinary life, raised by her aunt Magnolia—an adjunct professor and deep sea photographer. Jane counted on Magnolia to make the world feel expansive and to turn life into an adventure. But Aunt Magnolia was lost a few months ago in Antarctica on one of her expeditions.

Now, with no direction, a year out of high school, and obsessed with making umbrellas that look like her own dreams (but mostly just mourning her aunt), she is easily swept away by Kiran Thrash—a glamorous, capricious acquaintance who shows up and asks Jane to accompany her to a gala at her family’s island mansion called Tu Reviens.

Jane remembers her aunt telling her: “If anyone ever invites to you to Tu Reviens, promise me that you’ll go.” With nothing but a trunkful of umbrella parts to her name, Jane ventures out to the Thrash estate. Then her story takes a turn, or rather, five turns. What Jane doesn’t know is that Tu Reviens will offer her choices that can ultimately determine the course of her untethered life. But at Tu Reviens, every choice comes with a reward, or a price.

Jane Unlimited is another book I have read recently solely because of the author. I found the synopsis confusing and was a little unsure what type of story this would be, but I decided to pick it up anyway because I loved, loved Kristin Cashore’s Graceling series. The few things I did know about the story prior to reading it were: a) it is genre defying, b) it is almost a choose-your-own-ending book, but is written to be read in order, and c) umbrellas get mentioned quite a bit. Otherwise I was a tad confused about it all. Now that I have finished reading it I can say that, unfortunately, it wasn’t the right book for me. Jane, Unlimited is a combination of many classics with its own, very unique style and a mixture of mystery, science fiction, and fantasy.

Jane’s aunt made her promise to accept if she was ever invited to stay at the mysterious grand house Tu Reviens. So, when Jane’s friend Kiran offers just such an invitation, Jane agrees. But Tu Reviens contains many secrets and intriguing mysteries and Jane’s own choices will influence what she will uncover and how that will change her destiny.

In her author’s note Cashore indicates that Jane, Unlimited reflects a number of literary works including Jane Eyre, Rebecca, and The House of Mirth. Jane, Unlimited’s tone and style are very much reflective of these novels. It actually reminded me of a novel that I would be asked to read for senior English or a university course and then have to analyse it to death. Perhaps that’s why I didn’t enjoy it, because those are not my favourite type of books, but I can imagine someone who loved those classics really enjoying this book.

END_OF_DOCUMENT_TOKEN_TO_BE_REPLACED

Book Review: Liberty: The Spy Who (Kind of) Liked Me

What is a hero? Paige Nolan knows.

Edward Raynes, the young man who exposed America’s unconstitutional spying techniques, is a hero, even if half the dum-dums in the country think he’s a traitor. Or her parents, journalists who were captured by terrorists while telling stories of the endangered and oppressed. They were heroes, too. Were. . . or are—no one has ever told Paige if they’re still alive, or dead.

Not heroes? Anyone in the government who abandoned her parents, letting them rot somewhere halfway across the world. And certainly not Paige herself, who despite her fluency in five languages and mastery of several obscure martial arts (thanks, Mom!) could do nothing to save them.

Couldn’t, that is, until she’s approached by Madden Carter, an undercover operative who gives her a mission—fly to Russia, find Raynes, and discover what other government secrets he’s stockpiled. In exchange, he’ll reopen the case on her missing parents. She’s given a code name and a cover as a foreign exchange student.

Who is a hero? Not Paige Nolan, but maybe, just maybe, Liberty is.

Liberty – The Spy Who (Kind of) Liked Me is absolutely hilarious. It is a super fun, caper of a spy novel with an instantly likeable protagonist.

Paige Nolan’s parents, high profile journalists, are missing. They may be dead, Paige was never told. So when Paige is recruited from her (mostly) mundane college life by a spy (handsome, is younger than expected, and wears a suit very nicely), she is at first incredulous, then reluctant, but finally agrees knowing it might be the only chance of finding her parents.

The synopsis for this sounded fantastic, but it wasn’t until I started reading that I got an idea of just how awesome this book was going to be. I was captured from the first page and I didn’t not want to be released. The book is written in second person. Extremely hard to pull off and yet this book does it flawlessly. Paige is talking directly to the reader, warning them about the story to come, filling in a few details about how the whole thing came to be, and then providing commentary the whole way through the story. It is very well written, the reader is at once both in Paige’s head and right amongst the action.

END_OF_DOCUMENT_TOKEN_TO_BE_REPLACED

Wilhelmina has a hundred identities.

She is a princess. When the Indigo Kingdom conquered her homeland, Wilhelmina and other orphaned children of nobility were taken to Skyvale, the Indigo Kingdom’s capital. Ten years later, they are the Ospreys, experts at stealth and theft. With them, Wilhelmina means to take back her throne.

She is a spy. Wil and her best friend, Melanie, infiltrate Skyvale Palace to study their foes. They assume the identities of nobles from a wraith-fallen kingdom, but enemies fill the palace, and Melanie’s behavior grows suspicious. With Osprey missions becoming increasingly dangerous and their leader more unstable, Wil can’t trust anyone.

She is a threat. Wraith is the toxic by-product of magic, and for a century using magic has been forbidden. Still the wraith pours across the continent, reshaping the land and animals into fresh horrors. Soon it will reach the Indigo Kingdom. Wilhelmina’s magic might be the key to stopping the wraith, but if the vigilante Black Knife discovers Wil’s magic, she will vanish like all the others

Jodi Meadows introduces a vivid new fantasy full of intrigue, romance, dangerous magic, and one girl’s battle to reclaim her place in the world.

If this book finishes the way it starts, it’s going to be brilliant.

I have read only the first 12 chapters, but so far the plot is complex and engaging, the characters well developed and intriguing and the setting a well-built fantasy world.

Wil is the heir to the Aecor throne, or she was until the Indigo Kingdom invaded, murdered her parents and took her homeland for their own. Ten years later, Wil is one of the Ospreys, a group of Aecor orphans who are determined to take back Aecor and claim their birthrights. To do this, though, they must infiltrate the Indigo Kingdom palace and remain hidden from the vigilante Black Knife who hunts lawbreakers and magic users.

Magic, secrets, romance, spying and hidden identities, The Orphan Queen has all the makings of a fantastic fantasy adventure. I am very much looking forward to reading the full book.

Young Adult Fiction: ages 13 and up. Fantasy and Magic.

A copy of this book was provided by the publishers for reviewing purposes.