Book Review: Blaine for the Win 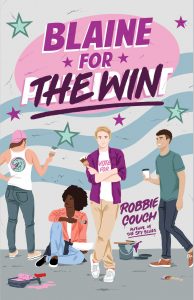 Blaine for the Win

I was looking for something fun and uplifting when I picked up Blaine for the Win. And, having just read Heartstopper books 1 to 4, this was the perfect follow up book.

When Blaine is dumped by his boyfriend rather than receiving the expected invite to the family holiday, he is devastated. Worse is being told the reason is because he isn’t serious enough. Sure, maybe most guys aren’t painting murals or eternally running late, but that doesn’t mean he isn’t serious. To prove his point, Blaine decides to run for student body president, as his ex-boyfriend’s replacement and his ex-boyfriend’s new boyfriend’s opponent (it’s complicated). His two best friends make the best campaign team and he finds an unexpected ally in Daniel, the boy he literally crashes into.