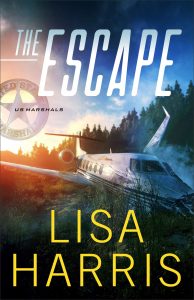 US Marshals Madison James and Jonas Quinn are thrust into a high-profile case when they are called on to transport two prisoners across the country on a private plane. But when the plane experiences engine trouble en route from the Pacific Northwest to Colorado, the pilots crash-land the aircraft deep in the heart of the sprawling Salmon-Challis National Forest.

When Madison and Jonas regain consciousness, they find both pilots and one prisoner dead–and one fugitive on the run. They’ll have to negotiate the rugged and remote backcountry through Idaho, Wyoming, and Colorado while tracking a murderer who is desperate to disappear–and will do anything to stop them.

A new series by Lisa Harris, this book will have you on the edge of your seat as the characters chase down an escaped felon.

Madison and Jonas are US Marshals. Their assignment is to transport two prisoners, but when their plane goes down they must fight to survive the elements and to find their escaped prisoner. But he always seems to be one step ahead of them and they will have to fight for their lives if they can try and outwit him.

The Escape is the first book in a new series. Judging from the ending, the next book in the series will continue the investigation into Madison’s husband’s murder. We readers are given just a few clues right at the start of the book and the end of the book, but otherwise the story remains focused on the escaped prisoner and trying to recapture him.

END_OF_DOCUMENT_TOKEN_TO_BE_REPLACED

Though initially skeptical about Caitlyn’s theory, Josh soon realizes that the attack that took his wife’s life was anything but random. Now the two of them must discover the truth about who is after Caitlyn’s team–and what their end game is–before it’s too late.

Deadly intentions by Lisa Harris is a fantastic thriller. It reads like one of my favourite TV crime shows, with just the right amount of action, intrigue, nail-biting they’re-not-going-to-get-out-of-this-alive tension, and just a touch of romance.

Caitlin knows something is wrong in the research science lab where she works. Three people have died in apparently unrelated ways, yet now, with the last death and the sharing of a secret, Caitlin suspects there is more to the deaths. But someone is following her and if she can’t discover who is behind the deaths, own life may be in danger. Unsure what else to do, Caitlin turns to Detective Josh Solomon, husband of the first victim. But if they are going to work together, she’ll have to convince him she’s right about her theories first.

END_OF_DOCUMENT_TOKEN_TO_BE_REPLACED

Book Review: A Secret To Die For

Psychologist Grace Callahan has no idea that she has a secret–one worth killing for. But when she finds out one of her clients has been murdered, she quickly realizes that the computer security specialist wasn’t simply suffering from paranoia.

Detective Nate Quinn has just been cleared for active duty after a bombing killed eighteen people, including his partner, and left him dealing with PTSD. His first case back on the job involves the murder of Stephen Shaw, and his only lead turns out to be an old friend, Grace Callahan–and her life is in grave danger. Someone believes Shaw gave his psychologist information before he died. Information they are willing to kill for.

A Secret To Die For plunges readers straight into the tension and thrills of a race to foil a terrorism plot. With sweet romance and limitless action, Lisa Harris weaves together a story of second chances and overcoming grief and tragedy.