Book Review: When You Get The Chance 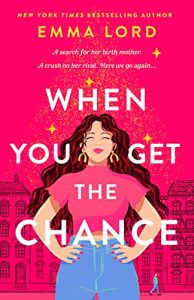 When You Get The Chance

I really hope the title of this book is in reference to the song I Hope You Dance. “When you get the chance, I hope you dance…”. If so, it is the perfect theme song for this musical theatre-loving celebration of love, found-family and connection.

Emma Lord delivers once again on a delightful YA contemporary novel about growing up and finding your voice.

Millie knows who she is and where she’s going. She just needs to get her dad onboard with the plan. When Millie is accepted into musical theatre pre-college, she is devastated when her dad says she can’t go. Stumbling upon her father’s old LiveJournal from his own college days provides her with the perfect clues to finally find her mother. If she can get her mother on her side, it will make precollege a reality. With the help of her best friend, Millie finds herself in her very own Mamma Mia – three possible women, three possible mothers. As Millie gets to know each one (through a series of hilarious and touching set-ups), it becomes harder to say goodbye to the possibly of the different realities she has found. Millie must also face the hurt she has caused in her search – to her family, friends and herself.

END_OF_DOCUMENT_TOKEN_TO_BE_REPLACED

Book Review: You Have A Match 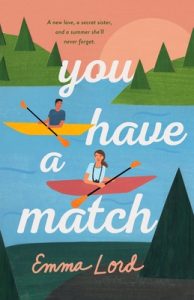 When Abby signs up for a DNA service, it’s mainly to give her friend and secret love interest, Leo, a nudge. After all, she knows who she is already: Avid photographer. Injury-prone tree climber. Best friend to Leo and Connie…although ever since the B.E.I. (Big Embarrassing Incident) with Leo, things have been awkward on that front.

But she didn’t know she’s a younger sister.

When the DNA service reveals Abby has a secret sister, shimmery-haired Instagram star Savannah Tully, it’s hard to believe they’re from the same planet, never mind the same parents—especially considering Savannah, queen of green smoothies, is only a year and a half older than Abby herself.

The logical course of action? Meet up at summer camp (obviously) and figure out why Abby’s parents gave Savvy up for adoption. But there are complications: Savvy is a rigid rule-follower and total narc. Leo is the camp’s co-chef, putting Abby’s growing feelings for him on blast. And her parents have a secret that threatens to unravel everything.

I thought this might have some deep, family drama but You Have A Match is a light, fun, summery romance with a focus on sisterly relationships.

When Abby signs up to a DNA match service along with her best friend Leo, she is shocked to discover she has a match – a slightly older sister. Determined to get to know her sister and discover how her parents kept such a massive secret from her and why, Abby ends up at a summer camp, along with her sister and Leo.

The summer camp setting makes this book perfect for reading on a warm summer day sitting on a beach towel, enjoying the sun and sand. Or perhaps when you are dreaming of being able to do all those things.

END_OF_DOCUMENT_TOKEN_TO_BE_REPLACED

Enter Jack, class clown and constant thorn in Pepper’s side. When he isn’t trying to duck out of his obscenely popular twin’s shadow, he’s busy working in his family’s deli. His relationship with the business that holds his future might be love/hate, but when Big League Burger steals his grandma’s iconic grilled cheese recipe, he’ll do whatever it takes to take them down, one tweet at a time.

All’s fair in love and cheese ― that is, until Pepper and Jack’s spat turns into a viral Twitter war. Little do they know, while they’re publicly duking it out with snarky memes and retweet battles, they’re also falling for each other in real life ― on an anonymous chat app Jack built.

Tweet Cute is seriously cute. But not in a cringey, saccharine way. It is one of the most genuine, adorable but realistic and heartfelt and, yes, cute books I’ve read in ages-maybe ever. It’s a story about social media, a story about family and the ways in which we fight for them. A story about growing up and trying to decide what to do with your life. It’s a story about the most incredible baking and comfort food. Seriously. Pack snacks. And it’s a story about falling in love, and YA contemporary readers are sure to fall in love with this delightful book.

Pepper is in control of her life. Swim team captain, top grades, and a place amongst the genius students of her fancy New York high school. So what if she feels like she doesn’t really belong, would rather have her family whole again and be living in Nashville, and maybe even have some genuine friends. When her mother insists that she take over their company’s Twitter feed as they launch new stores around the country, Pepper doesn’t expect to have one of her tweets directly challenge a local family-owned deli or for her to have to go head to head with a fellow classmate as he seeks to defend his family’s deli. As Pepper and Jack wage war on Twitter, their paths keep crossing in real life.