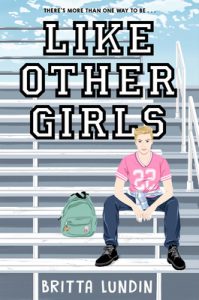 After getting kicked off the basketball team for a fight that was absolutely totally not her fault (okay maybe a little her fault), Mara is dying to find a new sport to play to prove to her coach that she can be a team player. A lifelong football fan, Mara decides to hit the gridiron with her brother, Noah, and best friend, Quinn-and she turns out to be a natural. But joining the team sets off a chain of events in her small Oregon town-and within her family-that she never could have predicted.

Inspired by what they see as Mara’s political statement, four other girls join the team. Now Mara’s lumped in as one of the girls-one of the girls who can’t throw, can’t kick, and doesn’t know a fullback from a linebacker. Complicating matters is the fact that Valentina, Mara’s crush, is one of the new players, as is Carly, Mara’s nemesis-the girl Mara fought with when she was kicked off the basketball team. What results is a coming-of-age story that is at once tear-jerking and funny, thought-provoking and real, as Mara’s preconceived notions about gender, sports, sexuality, and friendship are turned upside down.

What does it mean to be a girl? For Mara, growing up in a small, traditional town, being a girl means she has strict guidelines for how a girl looks and behaves and it’s everything Mara is not and hates. Like Other Girls is a novel about accepting yourself, accepting others and learning that there is no one right way to be a girl or to stand up for that right to be a girl in your own way.

This is not a book where the girl joins the football team and is accepted by the team. Just the opposite happens in Like Other Girls. When Mara joins the football team her relationship with her brother (the team captain) which was already unsteady, deteriorates even more. She has a massive fight with her best friend Quinn who initially encouraged her to join the team but who is now one of her greatest opponents. And her mother is no longer speaking to her or attending football games. That’s not to mention all the other responses from the other guys on the team, the coach or the other teams. When four other girls join the football team, Mara is determined that she won’t be cast as similar to them. She deserves to be there while they do not. But the reaction from the team and the sheer determination from the girls starts to prove to Mara that being a girl doesn’t have just one definition.

Alongside the story of rights, sexual harassment and equality, this is also a sexual orientation discovery story. Mara knows she is gay and has a plan for how she is going to come out – when she’s in college and far away from her conservative town. She could never be like Carly who is openly out and champions for LGBT+ rights. When Mara meets Jupiter and Jupiter hires her to do some work on her farm, Mara sees someone who is comfortable in their skin and clothes and who they are, someone in an LGBT+ relationship and Mara envies every bit of that comfort.
END_OF_DOCUMENT_TOKEN_TO_BE_REPLACED