Book Review: Charming As A Verb 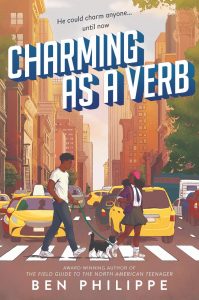 Henri “Halti” Haltiwanger can charm just about anyone. He is a star debater and popular student at the prestigious FATE academy, the dutiful first-generation Haitian son, and the trusted dog walker for his wealthy New York City neighbors. But his easy smiles mask a burning ambition to attend his dream college, Columbia University.

There is only one person who seems immune to Henri’s charms: his “intense” classmate and neighbor Corinne Troy. When she uncovers Henri’s less-than-honest dog-walking scheme, she blackmails him into helping her change her image at school. Henri agrees, seeing a potential upside for himself.

Soon what started as a mutual hustle turns into something more surprising than either of them ever bargained for. . . .

As charming as its title and main character, Charming As A Verb is a sweet realistic novel about growing up, falling in love, and finishing high school.

Henri Haltiwanger, Halti to his friends, is a hard worker. He needs to be if he’s going to make into his dream college, the college he and his father have always planned. As well as balancing debate team and maintaining his grades at the prestigious FATE academy, Henri runs his own dog walking business. When a classmate figures out his business is less of a corporate company and more a one-man show, she blackmails him into helping her fix her image at school. If anyone can charm their way into the popular crowd, it’s Henri. But what starts as blackmail, quickly turns to friendship.