Book Review: It’s All In How You Fall 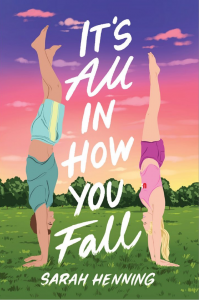 It’s All In How You Fall

I’ve said it before and I’ll say it again, I love sports novels and I am happy to say It’s All In How You Fall is a sports novel. Yep, I’m calling it. There is enough sports, injury, dramatic game play, dramatic moments, practice time, romance, and friendship to make this an utterly delicious sports novel.

I loved Sarah Henning’s Throw Like A Girl and in It’s All In How You Fall, she returns readers to the same world. Liv even makes an appearance. This time, we land in the world of gymnastics. Caroline is a competitive gymnastic about to make elite. She has an awesome new trick and she’s ready for Nationals. But, her doctors warn her that her chronic back pain is a sign she needs to stop and when she takes a massive fall during training, the decision is taken out of her hands. Forces to retire from everything she loves and worked for at fifteen, she is t sure what to do with herself until her brother’s best friend offers to help her date other sports. One sport a week until she finds something she loves. Determined to repay his kindness, she offers to set his up with his crush and her best friend, one meetup/date for every sport session. But, things get complicated when she starts to fall for Alex. END_OF_DOCUMENT_TOKEN_TO_BE_REPLACED

Book Review: There’s Something About Sweetie

Ashish Patel didn’t know love could be so…sucky. After he’s dumped by his ex-girlfriend, his mojo goes AWOL. Even worse, his parents are annoyingly, smugly confident they could find him a better match. So, in a moment of weakness, Ash challenges them to set him up.

The Patels insist that Ashish date an Indian-American girl—under contract. Per subclause 1(a), he’ll be taking his date on “fun” excursions like visiting the Hindu temple and his eccentric Gita Auntie. Kill him now. How is this ever going to work?

Sweetie Nair is many things: a formidable track athlete who can outrun most people in California, a loyal friend, a shower-singing champion. Oh, and she’s also fat. To Sweetie’s traditional parents, this last detail is the kiss of death.

Sweetie loves her parents, but she’s so tired of being told she’s lacking because she’s fat. She decides it’s time to kick off the Sassy Sweetie Project, where she’ll show the world (and herself) what she’s really made of.

There’s Something About Sweetie is very true to its name – totally and utterly sweet in every way. Seriously. Unicorns and rainbows have nothing on the sweetness that is the story of Sweetie and Ashish. A story about first loves, first serious break-ups, family expectations, body positivity and embracing who you truly are.

Sweetie is an athlete, singer (she just doesn’t sing in front of anyone other than her best friends) and dutiful daughter. She just wishes her mother could support her in accepting and loving her and her body the way that it is. Fat. Ashish knows how to play the dating game. He’s good at it. Or was. Until his girlfriend dumped him for someone else. Now he’s lost all game – on and off the basketball court – and is even seriously considering having his parents set him up with a girl. But when Sweetie’s mother refuses to let Sweetie date Ashish because of the size of her body, Sweetie and Ashish start dating secretly, and they find themselves surprised at the way they connect.