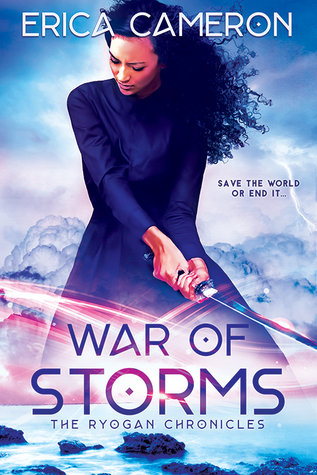 Khya arrived at the Ryogan coast too late to stop the invasion. Now, cities are falling before the unrelenting march of an enemy army, and Khya’s squad is desperately trying to stay ahead of them. Warning the Ryogans, though, means leaving her brother imprisoned even longer. Time is running out for everyone.

But how can her squad of ten stand against an army of ten thousand?

Calling in help from every ally she’s made in Ryogo, Khya tries to build a plan that won’t mean sacrificing her friends or her brother. It’s a tough balance to find, especially when the leadership role she thought she wanted sits heavy on her shoulders, and her relationship with Tessen is beginning to crack under the strain.

The end is coming, and there’s no way to know who’ll be left standing when it hits.

Khya and her friends have crossed oceans and visited strange lands, pushing their knowledge of the world, skills and endurance to the very limit in a bid to remove Varan and the other immortals from power and save their friends and family and the rest of Ryogan from their wrath. Now armed with a deadly secret that could give them an edge over the ruthless ruler, they must make a final stand and hope that their few numbers and allies can win against Varan’s army.

I have truly loved reading the Ryogan Chronicles. Whenever I return to this story I am impressed all over again at how deeply layered, complex and integrated the setting, peoples, languages, magic and plot are. There are four distinct languages and cultures referenced throughout the series, and each feels entirely real (in fact I’m kind of loath to say they are not, just in case I’m wrong and they do exist). While in some cases when I was unable to immediately translate the meaning of a particular word or custom when reading, the surround flow of the story, as well as the handy guides at the start and conclusion of the story, meant I never felt disconnected from the plot or the characters – just in awe of this author’s mastery of the world she has created within these pages.

The cast of characters are grown immensely over the three books and, with their unique names, countries of origins, languages and cultures, the cast of characters list provided at the start of the book is very helpful. Returning to the story for the final book was like returning to a group of dear friends and it was amazing how quickly I fell back into the rhythm of the story.

The ending to War of Storms is incredible. It felt complete and satisfying. I’d love to return to these characters (in fact I have serious book hangover now and I am very reluctant to pick up anything else) and yet I also feel statisyed with the arch of the story – nothing is overlooked or neglected. Erica Cameron can also be congratulated for her inclusion of diverse characters and the way they are so rightfully integrated into the story, while also peripherally raising the issue of cultures that do not value diversity in the same way.

I highly, highly recommend this series to readers who enjoy fantasy (YA and adult readers alike will enjoy this story), particularly fans of the Study series by Maria V Snyder. The books in the Ryogan Chronicles definitely need to be read in series order though, so start with book one and two before reading War of Storms.

Romance, friendship, and bonds that are stretched to the very limit. Freedom, power and a fight for justice. Beautiful, determined, lovable characters. Magic and endlessly cool powers and skills. Battles, tactics, weaponry and the skills needed to master and employ a range of deadly tools. Vast and varied scenery that is as unique as it is awe-striking. A tense and engaging flow of events that will keep you glued to the pages, heart in your mouth, on the edge of your seat. War of Storms and indeed the entire Ryogan Chronicles has something for everyone. Loved it.