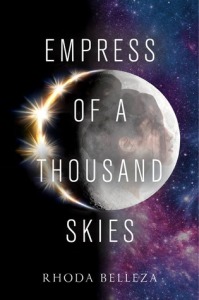 Empress
Rhee, also known as Crown Princess Rhiannon Ta’an, is the sole surviving heir to a powerful dynasty. She’ll stop at nothing to avenge her family and claim her throne.

Fugitive
Aly has risen above his war refugee origins to find fame as the dashing star of a DroneVision show. But when he’s falsely accused of killing Rhee, he’s forced to prove his innocence to save his reputation – and his life.

Madman
With planets on the brink of war, Rhee and Aly are thrown together to confront a ruthless evil that threatens the fate of the entire galaxy.

Empress of a Thousand Skies is compelling and action-driven science fiction. Planets and their moons, droids, holos, space craft, and a plot to keep the crown princess from taking her throne as Empress, it has a very Star Wars feel to it.

Rhee knows that she must one day take her place as Empress. But before that she plans to enact her revenge on the man who killed her family. Rhee has planned her revenge for years, but an attempt is made on her own life before she can act on her plans. Adrift in the galaxy, she is on the run. Meanwhile, Aly is framed for the princess’s murder and he too becomes entangled in the plot to return war to the planets.

Empress of a Thousand Skies is told in alternating chapters from Rhee and Aly’s perspectives. They come so very close to meeting many times in the novel and yet they never do connect. Instead their story lines run almost parallel as they uncover the motives behind those who killed Rhee’s parents and who plan to kill Rhee.

While Rhee desires revenge, it isn’t long before she realises that she is vastly underprepared to go up against the man responsible for her family’s death. She is a trained fighter, but it is mostly luck and the help of others that keeps her alive throughout the book. If she is to claim her throne she will need help and lots of it. It is just hard to determine who are allies and who are the enemy.

Aly is a refugee turned solider who has found a slice of fame as a reality tv show star. But he is quickly cast as the villain when he is framed as Princess Rhiannon’s murderer. Aly is a likeable character. He is a skilled mechanic, and pilot, and knows what it takes to survive.

I loved the tech in this book, especially the cubes that are implanted into everyone’s heads that record, translate languages automatically, and can replay memories. The cubes play a key part in the story. And there are also droids, much like the ones from Star Wars, space shuttles and crafts, and advanced communication technology (no lightsabers, though). The characters are diverse, from skin colour to language, home planet to species, with some more closely resembling animals with pointed ears, fur, or even tentacles.

Empress of a Thousand Skies perfectly sets the scene for the second book in this planned duology. There are plenty of big reveals throughout the novel and the epilogue introduces a new character perspective which is sure to continue in the next book. There are many high-tension scenes, close shaves, and space craft getaway chases. There is also the tiniest smidgen of romance. At first I thought we might be in for a love triangle, but really there isn’t any romance until right at the very end. And while there certainly isn’t a love triangle, there is the possibility of multiple love stories, but they will need to be developed in the next book.

Empress of a Thousand Skies lives up to its promise of being a high-action and engaging sci-fi.