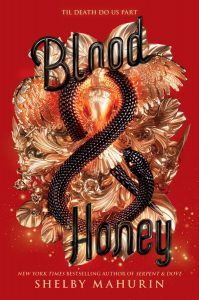 It was great the learn more about the magic in this world and the different kinds of magical creatures. Werewolves, witches, blood witches. None of them are cute and cuddly and the book is as bloody and injury-prone as it is sexy and totally inappropriate (which is often very funny (and did I mention sexy)).

Just when you think they might be close to a happy ending, it’s snatched from them. The ending is a bit of a cliffhanger, so be prepared to be desperate you get your hands on the third book.

Mature readers only for this one, folks. Every possible sexual reference you can image and the characters are mature, so it feels more like a new adult book. Fans of Sarah J Maas’s series will adore the Serpent & Dove series.

Reading age guide: Ages 16 and up.